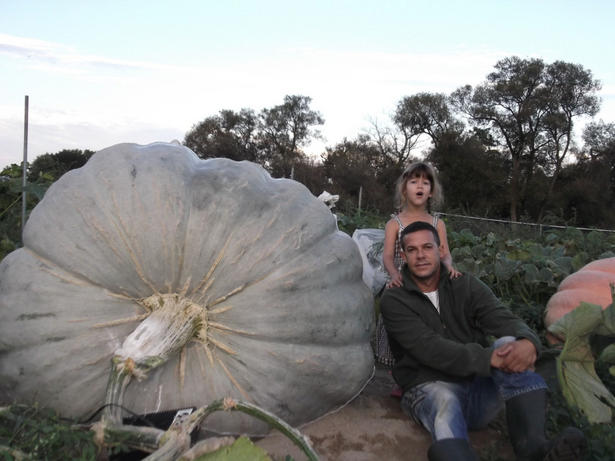 Article in The Star:

SIMCOE, ONT. — Joel Jarvis watched with the anticipation of an expectant father as his baby put on as much as 40 pounds a day.

The St. Thomas resident knew it was going to be a big one but never imagined in his wildest dreams that it would easily “squash” the world records.

His prizewinning squash tipped the scales at 674.3 kg or 1,486.6 pounds, easily eclipsing the old record of 560 kg or 1,234 pounds as confirmed by Guinness World Records.

Jarvis broke the record on Oct. 1 at the Port Elgin Pumpkinfest, which Jarvis describes as the “Kentucky Derby” for giant vegetables.

“This has been a long time coming,” he told the Toronto Star. “I’m 38 and I have been doing this since I was 11,” said the horticulturist, who got his training at the Nova Scotia Agricultural College in Truro, N.S.

“Sometimes the wind blows the right way and the sun shines right.”

No matter how you slice it, this is a big deal in the world of oversized vegetables. Word is seeds from the world’s largest pumpkin last year sold for more than $1,600 apiece.

“To be honest I might get $40 a seed,” said Jarvis, who figures his various prize monies — including from the Giant Vegetable Growers of Ontario — will add up to as much as $8,000, and that will likely go toward a new van now that his family has just expanded by one.

That’s right, he’s also the proud papa of a seven-pound baby girl, Rayna, who decided to arrive just as he was showing off his prize squash.

The added twist to the gargantuan squash is that it out-plumped the largest pumpkin at the Norfolk County Fair, which Jarvis also grew. The pumpkin weighed 1,426 pounds or 646.822 kg and fetched $2,000 in prize money at the fair in Simcoe, Ont. The squash, meanwhile, won $300.

As far as anyone knows in the 171 years of the Norfolk County Fair, this is the first time a squash beat out a pumpkin on the scales, according to Karen Matthews, the fair’s general manager.

The heaviest pumpkin on record weighed 821.23 kg (1,810 lb. 8 oz.) and was presented by Chris Stevens at the Stillwater Harvest Fest in Stillwater, Minn., on Oct. 9, 2010, according to the Guinness Book of Records.

Jarvis says his squash is not genetically modified but is the result of cross breeding and a whole bunch of fertilizers and non-stop tender-loving care. It was planted on May 6.

“You start off with a little seedling and it grows the same length of time as a regular squash or pumpkin, but as soon as you get it in the ground you are pushing it to the extreme with your fertilizers,” he said.

Jarvis said the vegetables actually grew for about 90 days and “there were days that it was putting on average 35 to 40 pounds a day. That’s bad for people, but when you are talking pumpkins and squash. . . ”

He said most people think that given its size, the squash wouldn’t be edible, “but my wife (Kristine) made squash soup last year with ours (another whopper of a squash) and it was fantastic.”

As you know, the NSFGA 2022 Annual Convention on January 26 has morphed from an in-person to a hybrid to a fully virtual event over the space of a few weeks.

With the recent extensions of public health orders, the CropConnect committee has made the difficult decision to cancel the 2022 CropConnect Conference.   We were looking forward to reconnecting with everyone, but the health and safety of our attendees and exhibitors are our top priority.  The hosting committee, made up of representation from your provincial commodity associations, have deemed that the reduced venue capacities make this event fiscally irresponsible to host.

Que´bec Parmentier has announced the acquisition of Ferme G. G. & A. Montminy, a renowned and large-scale seed potato producer located in the Pe´ribonka region of Québec. It’s located on the north shore of Lac Saint-Jean.

After nearly 30 years, the biological crop control company has changed its logo and visual identity.

Part-time farmers: How to make the best tax planning decisions

To make the most of tax planning, it’s important to identify what type of farming operation you’re running and how much of your time is spent on farming activities. In general, farmers fall into three categories: full-time, part-time or hobby.