Farm Credit Canada (FCC) released its annual Farmland Values Report. The national average farmland value increased 14% in 2014. This is a large increase over 2013, but lower increase than the 22% increase FCC reported last year. The patterns in farmland values differ across the country: Saskatchewan recorded an average increase of 19%, Ontario was at 12% while BC farmland showed an average gain of 4%. 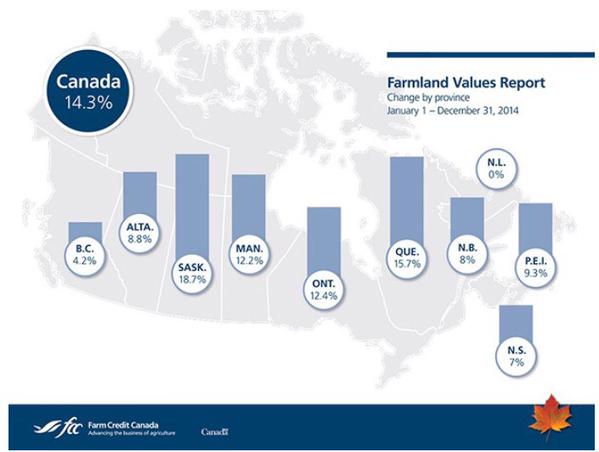 In several areas of the province, demand for farmland significantly outweighed the supply, creating competition for available land. This, coupled with low interest rates, appeared to have played a role in rising values.

Producers in eastern Ontario continued to expand, purchasing land in the immediate area and in neighbouring locations. Northern and eastern regions also saw prices rise as buyers from high-priced areas in southern and southwestern areas moved north in search of lowerpriced land. Markets in the north appeared to be dominated by a small number of buyers who acquired land, contributing to the increase in price.

However, while most areas saw moderate to significant increases, there were some that saw slight declines or no change in value. Sales in the province were accomplished through a mix of transactions including real estate brokered, property auction and land sold through the tendering process. is pleased to announce its national retail launch into Sprouts Farmers Market in the United States for the Company's Yofiit brand.

One of Bioenterprise Canada’s strategic pillars is building networks and creating opportunity for Indigenous and northern entrepreneurs and innovators in the food and agri-tech sectors, as well as young people.