The sight of nightshade's purplish/black berries in a "food grade" soybean crop is every producer's worst nightmare. They stain the seed and dramatically reduce the value of the crop. In theory, you would kill uncontrolled nightshade prior to harvest with either a herbicide (i.e. Reglone, glyphosate) or mother nature (i.e. a frost), the berries would drop to the ground, never go through the combine and the seed would be left unstained. Unfortunately this is a theory, and reality shows us otherwise. Around the 12th of October, a significant frost was observed in Waterloo/Wellington county which resullted in a number of annual weed species "dying off" in soybeans. The one notable exception was nightshade. Even though the leaves were finally starting to wilt after 4-5 days of consecutive frosty mornings, the berries were still very much attached to the plant. Plant dessication with herbicides has proven equally ineffective as many berries will still cling to the plant even after it has died off. The average plant in this field had 280 berries with each berry averaging 60 seeds for a total of 16,800 seeds per plant. 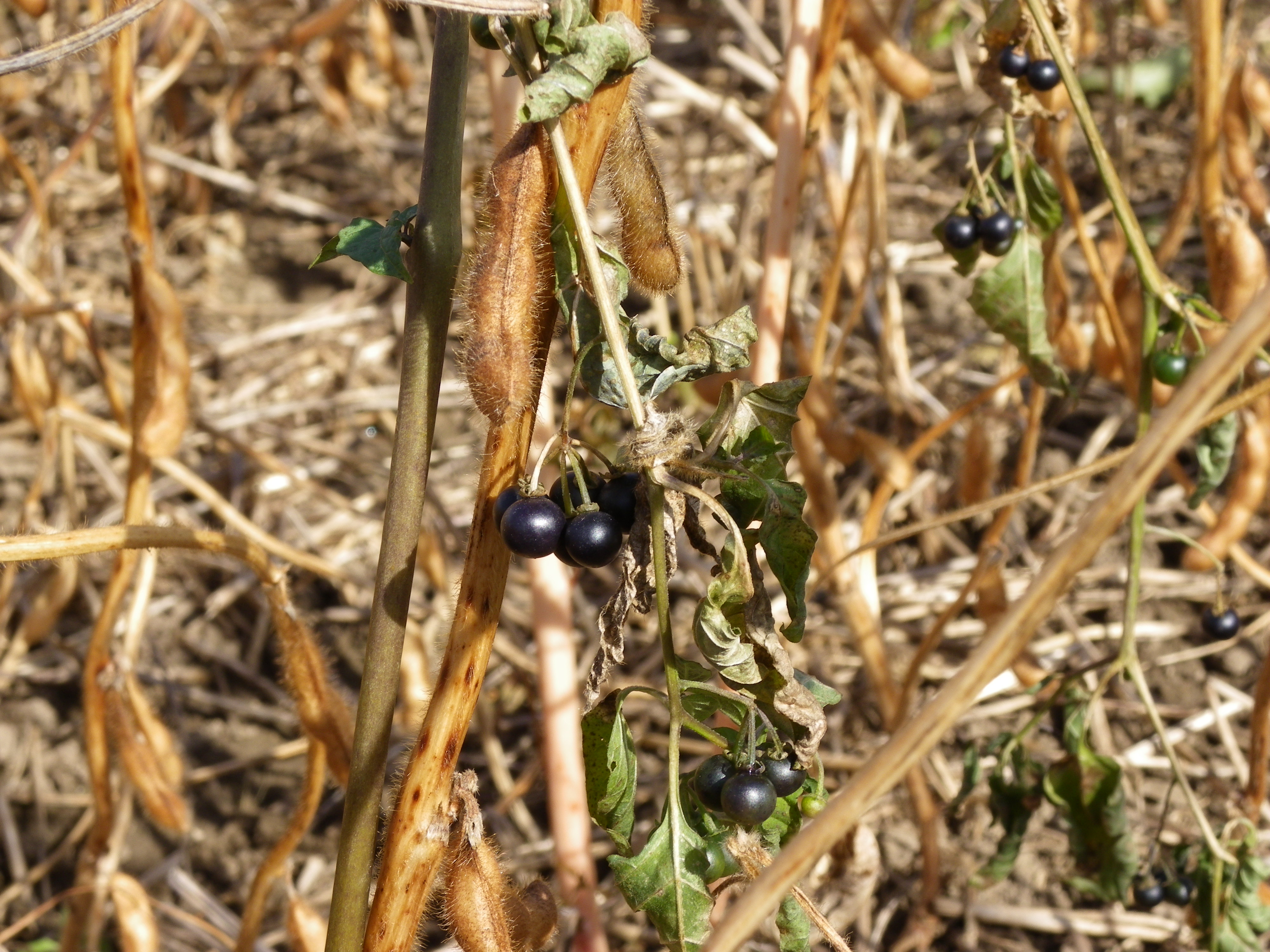 Comment by Wayne Black on November 8, 2009 at 9:05pm
Nightshade in some corn samples today at the elevator. My dad's field had it bad in a spot where the corn was thin and short. I think this weed needs an attitude adjustment next year!

Comment by Mike Cowbrough on October 20, 2009 at 4:30pm
Thanks Joe, you're absolutely right. There has been limited experience in Ontario with Valtera on nightshade, but so far it has done a very nice job.

Comment by Joe Dales on October 20, 2009 at 4:20pm
Hi Mike: The Valent company has a new product registered for nightshade as well.
Here is their news release on registration.

GUELPH, ON —Valent Canada has received Health Canada’s Pest Management Regulatory Agency approval to register Valtera Herbicide for use in soybeans. Valtera is a low use rate preemergence herbicide which gives growers residual control of many broadleaf weeds and enhanced post emergence weed control when tank mixed with glyphosate. It has been sold in the U.S. since 2001 under the trade name Valor® Herbicide.

New active ingredient
Valtera contains the active ingredient flumioxazin, a member of the protox inhibitor type of herbicides (Group 14), and offers new management options for weeds resistant to Group 2 & 5 herbicides. However, unlike many other Group 14 herbicides, flumioxazin provides enhanced burndown and residual control.

Flumioxazin works by inhibiting production of an enzyme important in the synthesis of chlorophyll. "Its rapid soil and water dissipation," said Regina Rieckenberg, Valent Canada sales and marketing manager, "along with a low use rate, results in a low carryover potential to rotational crops."

In identity preserved soybeans, Valtera is intended to be used in a program with other residual herbicides. It should be applied as a preplant or early preemergence herbicide, from 30 days prior to planting and up to three days after planting (before emergence). In burndown situations, it can be used as a foundation herbicide partner with glyphosate in glyphosate-tolerant soybeans.

"By using flumioxazin in a program with other herbicides," said Rieckenberg, "the grower helps to preserve the effectiveness of other herbicides and decreases or delays development of weed resistance. With excellent weed control and flexible rotational restrictions, Valtera ushers in a new era of weed control."

Ontarians head to the polls on June 2

On-off grazing is a management technique to minimize damage while grazing wet pastures. It is an alternative to using a sacrifice paddock.

Alfalfa weevil can be an issue in Ontario, particularly in south-western parts of the province. While outbreaks tend to be isolated, they can be severe and dramatically reduce forage yield and quality.

The Canadian Centre for Food Integrity (CCFI) is pleased to announce the election of three new directors to its Board of Directors.