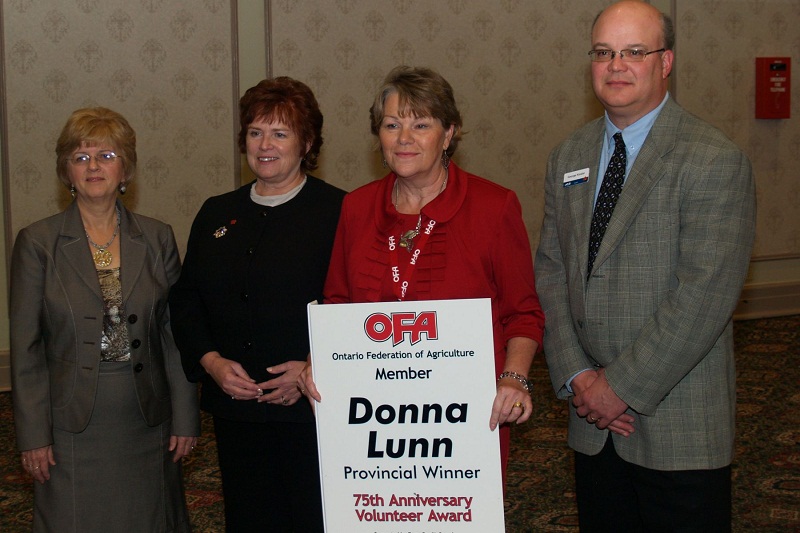 Guelph, ON [November 22, 2011]– Rural leader Donna Lunn received special recognition from the Ontario Federation of Agriculture (OFA) with the organization’s 75th anniversary volunteer award for her tremendous volunteer contributions to Ontario agriculture. Donna was presented with the award at OFA’s annual convention held recently in Toronto.

Hailing from Elgin County, Donna is well known for her leadership roles within her community and the larger agricultural industry. She is a champion for rural living, community development, sustainable agriculture, and understands the importance of strategic planning and partnership building. Donna is committed to local family and rural affairs, dedicating countless hours to a transitional home for abused women and children, Serenity House Hospice and other community programs.

“Volunteerism is synonymous with healthy communities, especially in rural areas, and OFA is so proud to recognize the energy and commitment that Donna Lunn has given back,” says Mark Wales, newly-elected president, Ontario Federation of Agriculture. “OFA relies on our volunteers – they have played a tremendous role in helping create the strong, successful organization we are today – and we honour the contributions they make to agriculture and rural communities every single day.”

Donna has held various executive, committee and representative positions with the Elgin Federation of Agriculture, and served as an OFA director from 1998-2009. She has dedicated countless volunteers hours to her local community and the broader agriculture industry, with her work recognized many organizations and the provincial and federal governments.

Two of her many project successes include the Food for Four exhibit and Project X.  She created a display entitled Food for Four at the 2010 International Plowing Match featuring the amount of food a typical family of four would consume over a year and explaining the agri-food industry’s role in feeding a family. Project X is a program Donna initiated to bring alternative crops to the local community. She was instrumental in bringing together local and international companies, governments, researchers and local producers to discuss the viability of alternative crops in Elgin County. This project continues to grow since its inception more than five years ago.

The Ontario Federation of Agriculture (OFA) is the largest general farm organization in Ontario, representing 37,000 farm families across the province. As a dynamic farmer-led organization based in Guelph, the OFA works to represent and champion the interests of Ontario farmers through government relations, farm policy recommendations, lobby efforts, community representation, media relations and more. OFA is the leading advocate for Ontario’s farmers and is Ontario’s voice of the farmer.

You are a very worthy of this special recognition.

Take care and talk to you soon,

CELEBRATE HOME FOR THE HOLIDAYS WITH CANADIAN DAIRY

Dairy Farmers of Canada (DFC) is launching its #ChooseCanadianDairy and Happy Holi-Dairy campaigns today, inspiring consumers to celebrate the holidays with high-quality products made from 100% Canadian dairy.

During a video address at Le Porc Show, the Minister of Agriculture and Agri-Food, the Honourable Marie-Claude Bibeau, announced an investment of more than $4.6 million for three projects to grow the pork industry within Canada and in international markets, and to help farms continue to ensure high levels of safety in the face of the threat of African swine fever.

A truck load of fresh PEI potatoes – 6,000 bags – departed from Charlottetown yesterday at 6 p.m. on the 1,300-plus kilometre journey to Ottawa where they will join representatives from the Island's potato industry in a grassroots and broad coalition of groups supporting the cause of PEI potato farmers in the face of a two-week major trade issue.

Garden in a Box celebrates end of successful first season

As part of the Ontario government’s plan to build Ontario and its commitment to connect every community to broadband internet by the end of 2025, construction is underway on a new infrastructure network in Stoney Point. This $3.7 million project will soon connect more than 945 homes, farms and businesses to reliable high-speed internet services starting in May 2022.