Understanding the Animals in Your Life: An Evening with Dr. Temple Grandin 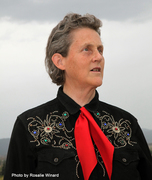 She is world renowed inspiration to people with autism and for her work as an animal behaviourist.

Dr. Grandin has developed humane livestock handling systems and been a consultant to the livestock handling industry on animal care standards. She has designed the facilities in which half the cattle in the United States are handled, consulting for firms such as Burger King, McDonald's, Swift, and others.

Dr. Grandin was named by Time Magazine as one of 2010's "100 most influentional People in the World". HBO also produced the award winning biographical film on her life titled simply: Temple Grandin.

RSVP for Understanding the Animals in Your Life: An Evening with Dr. Temple Grandin to add comments!

Heather Hargrave has decided to hide the list of guests.

The University of Windsor is partnering with the Ontario Greenhouse Vegetable Growers (OGVG) and Kruger Energy to investigate using existing wind farms to power and heat greenhouses in Southwestern Ontario.

Five tips for starting your own vegetable garden

Spring is in the air and that means it’s time to start planning your vegetable garden!

The Government of Canada announced the implementation of a new allocation mechanism for its dairy Tariff-Rate Quotas (TRQs) under the Canada-United States Mexico Agreement (CUSMA).

Arianne Phosphate (the "Company" or "Arianne") (TSXV: DAN) (OTC: DRRSF) (FRANKFURT: JE9N), a development-stage phosphate mining company, advancing its Lac à Paul project in Quebec's Saguenay-Lac-Saint-Jean region, is pleased to announce that it has successfully tested an enhanced process that will allow the Company to optimize its high-purity phosphate concentrate for specific end markets.