Each summer DVM students from the Ontario Veterinary College at the University of Guelph delve into practical experience at veterinary clinics across Ontario and additional locales. These blog posts are an opportunity to tag along with them this summer. Here student veterinarian Kate describes "choke" in horses.  Check out all the student blogs here.

Sally went out to feed her horses; Sugar, Frosty, Big Mac and their new addition Red, a 2-year-old warmblood gelding. Afterwards she noticed Red was out in the field pawing the ground. When she got closer to Red she noticed he was coughing and a lot of mucous was coming out of his mouth and nose. She knew she should call the vet.

One physiological anomaly in horses is that they cannot regurgitate. Their esophagus only moves food and water in one direction towards the stomach. So if anything becomes lodged they cannot bring it back up, causing the horse to “choke”. It is important to note that in horses, choking is an obstruction of the esophagus and NOT the airway, so horses are still able to breathe. The cause of choke in horses varies. The most common cause of choke is swallowing food or other material which is too big, dry or coarse, or which swells rapidly once chewed. This causes its passage down the esophagus to be slowed or stopped. It can occur in greedy horses that attempt to swallow hay without chewing it thoroughly or feeding dry grain or pellets. Be careful when deworming and feeding grain right after as a reward, as the thick dewormer may cause the grain to stick in the esophagus. And beware of big chunks of apple and carrots. Horses with poor dental health are also at risk because they may not grind or chew their feed properly. 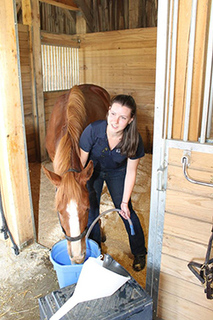 The most obvious signs of choke are discharge of saliva and feed material from the nostrils and or/mouth, depression and apparent difficulty in swallowing. When first ‘choking’ some horses will panic, make repeated unsuccessful efforts to swallow, cough and ‘gag’. If the condition has gone unnoticed, the horse may become dehydrated and severely depressed. The horses often look like they are colicking.

Red’s obstruction ended up being so severe, that he needed multiple visits to reduce the choke. He was treated with pain medication, muscle relaxants and sedatives to help in the meantime.

When Dr. Walker and I arrived the next day, Red still had the obstruction, although much of it had been reduced. We gave him a heavy sedative and waited for 20 min. The hardest part after giving the sedative is waiting. You want to quickly get involved and start helping the horse, but if you do this before your sedative has an effect then the horse’s adrenalin renders it useless and he is more difficult to handle.

Once Red was sedated, Dr. Walker passed a stomach tube up his nose and down his esophagus to the obstruction. Then we lavaged the blockage with warm water by funneling it down the tube. We could see we were making progress as more food stuff came pouring out his nose with each lavage. Dr. Walker gently kept feeding the tube forward until there was a slight pop with the tube and gurgling sounds could be heard. We had made it to the stomach; the blockage had been cleared. The gurgling sound was the gas in the stomach that was echoing up the tube.

“Smell that” Dr. Walker said as she pointed the end of the tube in my direction. She wanted me to know what stomach gas smells like so you know when you are in the stomach. At the same time Red had a big cough and as a result launched his stomach contents up the tube and right in my face as I went to smell the gas. No one said that being a Veterinarian was going to be a glamorous job. Once it was all cleared and Dr. Walker was sure that the tube was passing smoothly, we rehydrated Red with some electrolytes and water right to his stomach with the stomach tube already in place.

We left Red still a little woozy from the sedation. Red was held off any food for another few hours and then slowly returned to feeding with soft, small and frequent meals. Horses that choke, especially in severe cases like Red, are at risk of aspiration pneumonia. The clinical signs and antibiotics were discussed with Sally.

With a smile and wave we headed out from the barn and on to our next call.

is pleased to announce its national retail launch into Sprouts Farmers Market in the United States for the Company's Yofiit brand.

One of Bioenterprise Canada’s strategic pillars is building networks and creating opportunity for Indigenous and northern entrepreneurs and innovators in the food and agri-tech sectors, as well as young people.