Dairy cattle with enhanced immune responses not only have lower incidents of disease, but may also produce more bioactive compounds in their colostrum that are critical to newborn calves and are beneficial in fighting mastitis-causing pathogens, an Ontario Veterinary College (OVC) graduate student has found.

Research has shown that High Immune Responder (HIR) cows have a lower incidence of diseases, such as mastitis, metritis, ketosis and retained placenta. The HIR technology, developed by University of Guelph researchers led by Dr. Bonnie Mallard, measures the ability of cows within a herd to combat infectious disease. It identifies and ranks animals as being High, Average or Low immune responders based on the cell-mediated and antibody-mediated arms of the adaptive immune system. 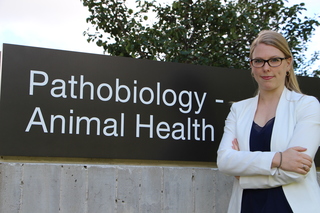 Novel methods of enhancing dairy cattle health may help to prevent the incidence of diseases such as mastitis, which has been associated with economic losses resulting from milk quality penalties, decreased milk production, culling of infected cows and treatment costs. Optimizing dairy cattle health contributes to food safety, decreases the need for antibiotics and is an essential component of animal welfare. Selective breeding for cows that have the ability to mount more vigorous immune responses compared to other cows within a herd is a promising approach to enhance overall disease resistance.

The HQP program is designed to help graduate students become ‘market-ready’ and provides them with the opportunity to learn about business, commercialization and societal interactions with the agri-food system by taking a course entitled, ‘The Integration of Science and Business in Agri-Food Systems’. “You are introduced to topics such as value chains, business planning, strategic management, market analysis, patenting, entrepreneurship and obstacles that may be encountered when commercializing a scientific discovery,” says Fleming. “It is also a great way to practice communication skills, network with other people and be inspired by success stories.”

Fleming chose three bioactive milk components for her study including total immunoglobulin isotype G (IgG), β-lactoglobulin (β-LG) and lactoferrin (LF), since they were easily measureable and heritable and have been shown to exert anti-microbial activities against mastitis-causing pathogens.

Colostrum and milk samples were taken from Holstein cows previously classified as High, Average or Low immune responders on the day of calving and day five post-calving, respectively.

“IgG is critical to newborn calves”, says Fleming. “If they don’t receive enough IgG within the first day of life, they’re increasingly prone to sepsis, respiratory disease and diarrhea”. In addition to β-LG’s activities against mastitis-causing pathogens, the protein has been shown to exert anti-viral, anti-cancer and anti-oxidant activities.

Fleming, who completed her undergraduate in the OVC’s Biomedical Sciences program, debated whether to target human, cow or calf health when designing her thesis. “This research actually targets all three areas, since higher quality colostrum with increased contents of host defense molecules may aid in preventing disease in newborn calves, in enhancing udder health and in providing an efficient source of ingredients for functional food and nutraceutical production for human use”, she says.

Another important benefit of her research may be that dairy producers can apply the knowledge of her work right away. “Cows can be classified as High, Average or Low immune responders using the HIR test system and colostrum can be banked from High AMIR cows for future administration to calves at risk for failure of passive transfer”, she adds.

“Selectively breeding for HIR cows may provide one potential solution to naturally improve the quality of colostrum and milk, which may benefit the health of humans and subsequent generations of dairy cattle”.