Agriculture has advanced continuously throughout the ages to ensure that people have enough to eat.  In years past the majority of the worlds population were directly involved in agriculture and so they didn't fear these advancements.  That is no longer the case, at least not in the privileged countries of the world.  Here in Canada roughly 98% of the population has nothing to do with the growing of there food, excluding any small garden they may maintain.  So it should not come to any surprise that people are now afraid of what agricultural advancements might be.  The GMO, genetically modified organism, easily serves as the poster child for this disconnect between people and the food they eat.  As a farmer, who plants and grows the corn, wheat and soybeans that find there way into the stomachs of the world, I am not at all concerned about GMO grains, however, I completely respect and understand the concern.

I try to read as much as I can on the concerns of anti-GMO protesters and there organizations and find that there is a great deal of miss-information out there.  But lets be straightforward, the only reason there are GMO grains is because farmers are willing to plant them.  So as farmers we should be taking the anti-GMO voices very seriously.  When we see something wrong, correct it!  As consumers we should also be taking this seriously, when the science isn't clear or there is concern, ask questions and get answers!

To be upfront about my farm, most of my crops are non-GMO, starting this year only my corn will benefit from targeted genetic manipulation, and if I could find a high yielding corn that wasn't GMO, i would grow it.  That is because I firmly believe people should have a choice, and in the case of soybeans I can secure a significant price advantage to make the effort worth while.  So, yes, its all about the economics, I am not willing to loose money to grow a NON-GMO grain over the alternative.  Its not that I am greedy, I just hope to pay the bills with one job someday. 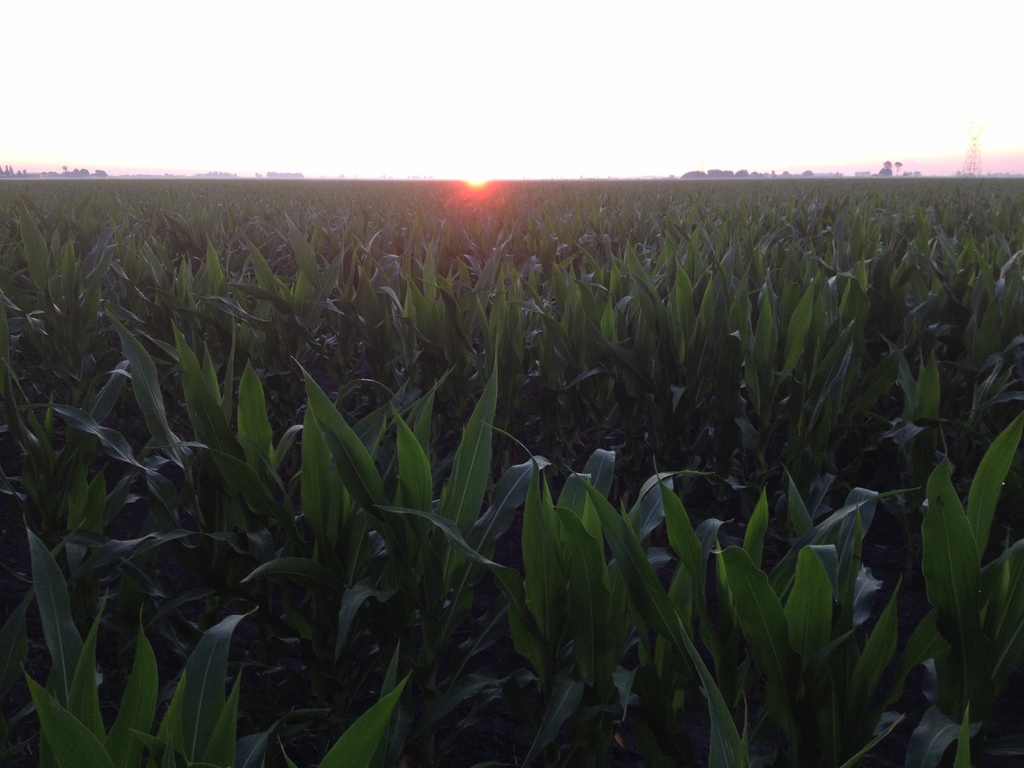 Sunset over the corn field

Let us first answer a seemingly simple question, what is GMO?

Is it a plant that has had its genetics changed so that it is different in some way?  NO, thats not it.

I don't believe there is a single agricultural plant on the entire planet that has not been genetically altered.  The primary method of changes are simply selective breeding.  Farmers plant the seeds from the plants that gave them the best results.  The consequence of this selection, is the genetics of the less desirable plants are not carried into the next generation of plants.  You may argue that this is more of a genetic genocide rather than manipulation, but the end result is a breed of plant that performs differently than the previous generations.  The bad seeds are weeded out.

As agriculture advanced, so too did the breeding programs.  From picking the best we advanced to breeding the best - that is cross pollination.  This tactic allowed growers to mix the genes of one variety of plant with another, and combined with selecting the best of the results we created hybrid variety of plants.  The process of cross pollination results in somewhere between 200,000 and 500,000 genes being changed, at random, without control.  And this has been acceptable for as long as people wanted to eat.  Cross pollination alone is not, nor has ever been controlled or regulated, nature just does it all on its own.

However, if a plant has 1 specific gene that effects a specific characteristic of the plant changed by a scientist using very specific and controlled methods, its GMO.  And most GMO are exactly that, single and specific genomes being changed or added.

Simple probability would suggest the GMO has 1/200,000 or 0.0005% a chance to be harmful compared to natural cross pollination.  Or 99.9995% likely to be safer than random pollination, and the new product goes through approval on top of that.  Its those numbers that give me the greatest confidence that a GMO grain is safe, there is just not enough difference to be otherwise.

And in the case of golden rice, where that gene causes rice to contain vitamin A, its a GMO that has the cure to prevent over 1-2 Million children from death and an additional 500,000 from developing blindness.  Its no longer a question of harm, but rather why are we willing to even consider not using GMO.

There is much more to think about when it comes to GMO, such as how it changes the farm practices in terms of pesticide use.  I will save that subject for next time.

Best read my comments again !! The terrorists that I speak of are the ones that commit illegal acts destroying property and breaking laws because they oppose GMO technology.Evidence says give farmers a good price and they will grow enough as proven by the large record breaking crop in 2013.Also it is GMO corn that broke the 300 bu/acre mark (327 bu/acre) in Ontario and 400 bu/acre mark (454 bu/acre) in the USA .The sharing of this recipe to get high yields will have farmers breaking 400 bushels in Ontario and 500 bushels in USA within this decade.But then if people do not have the money to buy food there will always be people starving around the world.There are a number of countries improving their growing knowledge changing from importers to exporters of commodities(China Brazil Argentina and others have changed).By the way I am a dealer for both organic and natural fertilizer for use on my GMO crops keeping both my quality and quantity of my crops high which I feed to my hogs.So you are entitled to your opinion as I am mine. No mud slinging intended as I speak with years of experience and research.

John, Unfortunately you have just proved your own point re believing what you read no matter the source. It is very offensive to see you categorize ALL people who are against GMOs at "terrorists". Not all technologies are good just because they are new and novel. Assuming that the world cannot be fed by organic agriculture is not factual, just as assuming that GMOs are the solution to feeding the world is not factual. You only prove your ignorance about organic agriculture and about global food issues. Frankly, there is probably just as much evidence that organic agriculture can feed the world as there is evidence suggesting GMO based agriculture can. There is also substantial evidence that neither will feed the world. Who are we to say? So please stop slinging mud.

It is quit clear that there is a lot of information floating around the internet and people tend to believe what they read no matter the source.Good thing there are people out there that understand what is really going on in the world of farming .The terrorists that belong to the anti gmo movement seem to think it is their right to go out and commit illegal acts to get their message out there destroying property and just simply breaking the law rather than understand the real truth  about the safeness of the GMO technology and how it is done.They would rather see people starve then accept this new technology.Then there is the organic movement that thinks it can feed the world LOL

Excellent comment Colin,thank you.   Admittedly, as simplistic as my probability calculation was, it was more to demonstrate the point as to how much variability exists within the natural course of things.  Many of the points you have heard are not wrong, but over simplify the situation and can easily result in misinterpreting the situation.  I will definitely address some of your points in my next blog and hope to cover all of them over the next few.    For the record, I am not a geneticist or a scientist, but much of the fear about GMO stems from how they are being used, and on that I have direct experience.  Where my scientific interpretations are in question, please say so, I will happily endeavour to contact the appropriate source (and not Wikipedia or google) to clarify.

Disclosure up front - I am not a scientist, nor do I fully understand the process of Genetic Engineering. Here is what I have heard that has some credence, though it may  not be true - you confirm.

I'll admit that I am skeptical of health hazards of consuming GMOs. But I am convinced of the ecological hazards. So far, GMO crops have contributed to soil degradation, excessive use of herbicides, super weeds and pest resistance, genetic drift contaminating non GMO crops and related wild plants, loss of biodiversity, etc.

Just because the technology is novel, and based in science, does not mean it is good. Science can produce bad technologies. Genetic Engineering is one of them.

Weakness in the US dollar helped to push corn and soybean futures to gains on Tuesday, while wheat managed just a mixed close.