As great as the benefits are for Golden Rice, with the potential to save 2 million children from dying of malnutrition, the reality is most GMO products are not focused on food nutrition but rather pesticide use.  A Pesticides is a general term for a substance used to control or prevent unwanted pests, such as insects, weeds and diseases.  There are numerous types of pesticides, a few common types include herbicides (controlling…

Agriculture has advanced continuously throughout the ages to ensure that people have enough to eat.  In years past the majority of the worlds population were directly involved in agriculture and so they didn't fear these advancements.  That is no longer the case, at least not in the privileged countries of the world.  Here in Canada roughly 98% of the population has nothing to do with the growing of there food, excluding any small garden they may maintain.  So it should not come to any…

And a New Season Begins

The slow pace of winter is starting to give way to a renewed urgency to get things ready for planting season.  The winter has stubbornly refused to let go, but as the sun climbs higher in the sky and the hours of daylight continue to increase, its days are numbered.  That doesn't stop the cold mornings from putting on a show. 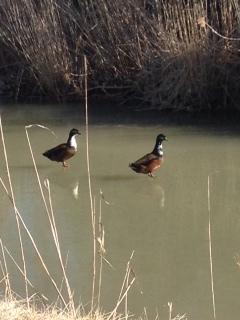 These poor ducks couldn't get there feet…

When it comes to the growing season for Canadian farms, the southern counties in Ontario rank among the longest seasons, with favorable weather patterns and productive soils.  The land is relatively flat and ideal for producing a multitude of crops.  The two most southerly counties, Kent and Essex have a significant role in Canadian agriculture.  But it wasn't always this way.

Before the area was colonized this was a forested land with many poorly drained swamp like areas. …

Farm Safety is no accident.  Long hours and heavy equipment make for the best conditions to have accidents happen, but they don't have to.  This time of the year, well in advance of spring work is the perfect time to plan for the coming year, and SAFETY should be a big part of that plan.  It is very easy to convince yourself "it won't happen to me" and you may even think theres nothing that can be done in advance, but I'll say your wrong if thats your approach to a safe farm.

Not Easy Being a New Farmer

The last half of 2012 was busy for me, even took on custom combining to give me an extra reason to run home fast from the factory.  And although the crops turned out good, the markets are favourable, it was still a tough year.

My appeal (Detail in a prior Blog) to have my farm land taxed at the farm rate came, and the decision made, NO you don't get the farm tax rate, you get to pay…

This is no record that will make the evening news, or ever the local newspaper, but a first none the less. My cousin joined me in the field for first ever 10 furrow round.  Up until now this field had never seen more than my 5 furrow plough.  But on…

The wheat is off, the crops are sprayed, the pressing field work is behind me.  There is always more to do, but its no longer time critical.  Sure i can pull some weeds in the field, but it doesn't need to be done today.  The wheat stubble needs to be plowed, but no rush, I would prefer a good rain to sprout the lost wheat before I start anyhow.  Sure the free range chickens and turkeys need constant attention, but that has become no different than doing the laundry, its just part of life.…

A Slow Start to Wheat Harvest

I almost made my first round with my R52 Gleaner, but didn't quite make it.
It started out well, ran a moisture test from the front headland at under 14%. Then I started adjusting the concave to get a better sample. Stopping every 100 ft to check to see how much grain I was throwing over. Opened up the fan damper, tightened up the concave again, adjusted the sieve. Still a bit of chaff and heads in the bin, but Beacher Wheat is hard to harvest. Now starting to put some material through…

On the mind of a young Farmer

Yes the Canadian census confirms I am a young farmer and by a long shot.  I have been reading some of the stats to learn that the average age of a farmer in Ontario is up to 54 yrs.  I have almost 2 decades to go through before I get there.  Thinking back on how much I have seen farming change over the years so far, i get the feeling I am in for a shock before I make the "average" age.  Thats all good, its exciting times.

I as other farmers around here, well if you take twitter as…

It is starting out to be an exciting season.  The weather has been cooperating with my work schedule and so far my decisions have resulted in planting success. The warm weather has brought Soybeans out of the ground after about a week.  Most of my Soys are planted on land that was plowed last year, and this ground is holding moisture very well.  I had to work the ground…

Corn is in the ground!

My corn is planted and on its way up!  It was none too warm on the weekend while I sat on my open air tractor planting two fields of corn.  The cold rain on Monday gave me a bit to worry about, daytime highs of 13C are not particularly desirable, but the heat has shown up and the corn seed has noticed.  Only5 days in the ground and I have an up shoot. The forecast has some reasonable temperatures called for, so I hope to see it out of the ground by the end of next week.

Been doing my best not to plant corn yet.  Nights are just too cold.  Taking the extra time to get things ready has been well worth it.  While moving equipment around I noticed a slash on the front tire of my planting tractor.  At first I thought I had driven over something, but it was far worse.  The rubber was simply peeling away from the cords.  Can't be too upset, the tires were likely over 20 years old.  My first thought was replace the damaged one, then I immediately decided, the other…

Wow, does time fly when your busy.  The mild and dry spring has given me plenty of opportunity to take care of a lot of field maintenance issues.  New culverts, fixed tiles, disc/level plowed ground.  I have made use of every minute of sunlight and good use of tractor lights as well.

The ground has dried out well, allowing field work on what is usually the last to be fit, that plowed ground.  Even spreading urea on the wheat, not a mark in the field.  The moisture is there, just…

My Mistake - My Opportunity

With the summer like temperatures last week, I couldn't keep myself out of the field.  I took advantage of the warm weather to burn down the grass on the banks and burn off some bean straw piles in the field in uncharacteristic comfort - a short sleeve shirt in March.  And although the calendar scared me away from working any ground, that volunteer wheat which I left in the field last fall to prevent the ground from blowing was starting to look a bit big.  So I rushed home from work,…

When Neighbours Stop by - its a good thing

The day started off with intent to make good use of this summer like weather in winter.  With spring around the corner, I have a great deal of pre-field work field work to do.  There is always a few broken tile that need repair.  I have dug up a few with the old fashioned method - the spade.  But today I hooked up the three point hitch backhoe.  This is a great tool - not too big and heavy and much easier than shovelling by hand.  So I started out by extending a culvert i dug in last year…

Hard to work off the farm

The "slow" pace of winter months has been keeping me exceedingly busy lately.  Between getting paper work in order for tax time, learning and repairing my new to me grain header, general repairs and maintenance I must find time to work a full time job.  With todays warm weather it was like torture to read the odd tweet about other farmers using the good weather to get equipment ready.  To make maters worse, the plant lost its computer network today, so it was a bit slow at times, those times…

My OMAFRA troubles and my advice to avoid them

Its never nice to hear of someone facing problems, but its useful to take advantage of the opportunity to avoid them yourself.  My opinion of OMAFRA is greatly tainted, but I am open minded enough to realize most problems could have been avoided.

At issue is the loss of the farm tax rebate which holds municipal tax rates to, well, basically the equivalent of where they alway were.  Without the rebate, taxes quadruple.  As it stands today, my issue is only with the 2012 tax year.  So…

The enemy to new farmers - OMAFRA

It has been a very busy couple of weeks.  Making headway on rebuilding my grain header, want to get that out of the way so I can start on the tractors and tillage equipment.  So although I was beginning to feel like I was making progress, in steps OMAFRA.  My farm doesn't qualify for the farm tax rate.  In the past, my father had recieved an exemption from the FBR system for religious reasons.  Having taken the decision to join the system rather than appose/avoid it, i opened up a can of…

The Farmer - A more global view

Thanks to the insistence of my wife, this past week was spent in the luxury of a Caribbean resort in Jamaica.  But credit to a day long excursion to an inland coffee plantation I returned home with more than a tan.  In our high quality of life society it is sometimes easy to overlook that we are the worlds wealthy and the vast majority of people in this world can only dream of the lifestyles Canada's lowest paid get to live.  The farmers I saw didn't get the option to own their land, or even…

Oct. 24 is voting day in municipalities across Ontario

Kreisel Electric to expand battery production capacities to over 2 GWh

According to a Sept. 19 report from TechCrunch, InnerPlant — a startup recoding plant DNA, allowing the plant to emit a signal that can be detected remotely — recently completed $16 million in Series A funding, which included a contribution from John Deere.

Visitors can unlock a new video each day in October

Ag Growth International Inc. today announced that Tim Close has stepped down as president and chief executive officer and resigned as a director of AGI to pursue other opportunities.