Day 13: An inspiring day of tours - from livestock trading to newspaper writing! 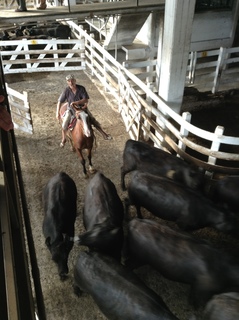 Impressive in size, an average day moves 6000 to 7000 head of cattle. Buyers walk above the pens with the auctioneer or on horseback for a better view of the livestock. We felt as though we were following a history lesson as the tradition of gauchos on horseback moved cattle from trailers to pens. The cattle purchased and shipped to abattoirs and butchered for domestic consumption. The cattle are finished at a much lower weight than we normally see in North America due to the Argentinian preference for smaller cuts of meat. 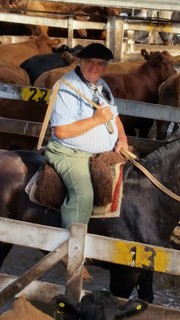 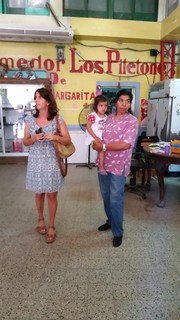 Our second stop was a non-governmental organization called Comedor Los Piletones DeMargarita.  We met with Margarita who has dedicated her life to helping the poor of Buenos Aires.  Margarita is a highly respected woman who was an orphan growing up in the poorest region of Argentina. She has raised 12 children and tirelessly put her needs aside to help others. Through donations and the help of 30 volunteers she has built a kitchen that provides more than 2000 meals each day, established a medical centre, pharmacy and dental clinic. These services are provided through a relationship Margarita has established with the university medical school. There is a nursery school providing care for children from six weeks to four years old so that teen and working moms have access to child care.  Noticing that the children were lacking stimulation she developed an orchestra for children in the area. This important activity has brought kids off the street and helped some overcome drug addictions. Margarita's last project is to build a women's shelter. At the completion of this project she will pass along her knowledge and create succession so the legacy of her generosity can continue.

Our first stop after lunch had us meeting with the director of fundraising for The Cimientos. This organization was established in 1997 and they have had many successes in that short time. They walked us through the pathway of a mentorship program they have created that helps vulnerable kids transition from primary to secondary school. They had realized this was where the greatest risk of drop-out was occurring. With 1170 secondary school students dropping out per day the program offered by Cimientos has been successful. Follow them on Twitter @cimientos.

Finally the day wrapped up at La Nacion - a national newspaper that has been in production for 145 years. We met with Norberto Frigerio, public relations representative. Even though Mr. Frigerio spoke to us in Spanish his passion and articulation was evident. He shared with us the issues the newspaper has faced through the political challenges Argentina has often faced such as having to reduce the printing to four pages when they could not purchase paper during Peron's reign.  La Nacion provides a weekly agricultural supplement in their Saturday edition. They report on regional economies, rural meetings and commodity prices. The paper prints 330,000 copies for the Saturday and Sunday editions and 230,000 copies Monday to Friday. We learned that a copy of La Nacion is sent to Pope Francis each day!

The news that pigs in the Dominican Republic tested positive for the animal disease African swine fever (ASF) is raising alarm bells for Canadian pork producers. ASF has been spreading throughout pork-producing countries in Europe and Asia and has reached the western hemisphere for the first time in 40 years.