Our day began in the historic Stockyards District of Fort Worth, once called "Cowtown". This was once the great livestock exchange of the region, as animals made their way into the area‎ by rail. The economy and infrastructure has changed, but the industry has adapted. 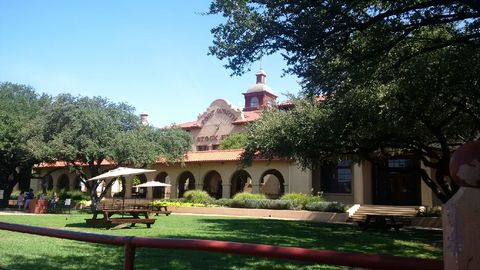 At Superior Livestock Auction, bimonthly livestock auctions are held ‎in the original Livestock Exchange. With a twist. It's all done remotely via satellite and web, and has been since the 1980s (using television at that point, not web).

The auction has a network of hundreds of field representatives throughout the country, working with farmers and ranchers to improve their herd health and genetics, obtain the necessary certifications and film video footage of the animals for buyers to see via the website. A single lot of cattle will sell in 30-90 seconds. As you can imagine, auction days are action packed and buyers need to be ready with their bids.

After visiting Superior Livestock, we headed into The Stockyards in Fort Worth to watch the cattle drive and explore the area. The cattle drive runs every day at 11:30 and 4:30 out front of the historic stock yards building. After managing to find a bit of shade, we were greeted by 13 longhorn cattle meandering down the street, slowly but surely. When the cattle made it down the street some of us ventured over to watch the historic reenactment of a shootout. 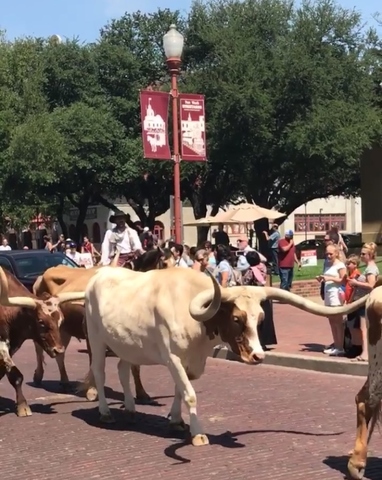 The group then split up and headed to grab food at various spots in the area, ranging from Cooper’s Bar-B-Que to the White Elephant to the highly recommended chicken fried steak, (a battered & deep fried seasoned steak) at Horseshoe Hill.

After lunch (Texas BBQ for some, the local saloon for others) the class headed to Bonds Ranch in Saginaw, an extensive ranching business with locations throughout the southern USA, which moves hundreds of thousands of head per year. With a goal of obtaining the best return on investment, Bond's purchases cattle from smaller operators and feeds them until they are sold to a finishing operation. We enjoyed a frank discussion of the industry with Pete Bonds, who chewed tobacco as he answered questions. Yes, we are really in Texas! From Bond’s Ranch, we headed to the Mesquite Championship Rodeo. On our way, we stopped for ice cream treats for those who wanted them. First up at the rodeo was the barbecue buffet with delicious ribs, pulled pork, beef brisket and ribs. The rodeo was about two hours of western fun, with everything from bucking broncs to steer wrestling, roping and even bull riding!