Our day began leaving the sunny Mediterranean coast and travelling to the small rural village of Alameda. We visited the Centre Tematico del campo Andaluz. This was a museum dedicated to teaching people about the past farming practices and traditions. We were met by a museum guide, and two local farmers, a father and son – Antonio Sr. and Antonio Jr. Antonio Sr. was 90 years old and had, in his lifetime, farmed in the traditional way which, for olive oil production, had not changed substantially since the Roman times 2000 years ago. Practices finally started to modernize in the mid-20th century.

Three main exhibits were set up in the museum: olive oil, buckwheat, and lime (CaC02). Traditional implements and small models of old equipment were on display. An olive oil press was on display from the 17th century, and another model that showed the Roman version of the same process. These two processes were essentially the same, with slightly different materials and technologies. A lime baking oven was reproduced on site, showing how villagers took limestone and processed it into lime that could be used for whitewash, insulation, and disinfectant, as well as a preservative for fruit, and moisturizing skin creams. The oven was made with clay and shaped like a dome, the limestone was heated to separate the lime from the mineral stone. Lime was also used as a soil amendment.

We then toured the local church which housed the grave of Jose El Tempranillo, a famous bandit who robbed the rich to give to the poor. Sunday morning Mass was about to begin, and we could hear the choir getting ready for the service. Even in a small rural town, the church was very ornate with beautiful gold structures. They told us about their traditional processions that take place during Holy Week, which everyone in the village participates in. Faith is obviously a very important part of their lives.

We then drove to Seville, passing acres and acres of olive trees along the way. We were greeted by Inmaculata, or Inma for short. She took us on a walking tour of the city centre. Seville has a population of 750 000, and is the fourth largest city in Spain. Christopher Columbus is buried here and his influence is a part of the identify of Seville. Palm trees adorning the city came from California and Africa. Many of the buildings were decorated with whitewash and yellow trim. Yellow paint, a colour that attracts mosquitos, was created using a pesticide which helped control malaria and other insect-borne diseases in the population.

We saw the Roman aqueducts which were originally made with lead pipes, replaced with clay by the Moors in the 9-10th century, which resulted in a dramatic increase in life expectancy for the citizens.

The main palace, Royal Alcazar, was used as the set for High Garden in Game of Thrones, and the Plaza de Espana was used as the setting for Star Wars, Attack of the Clones, the Nabou location where Anakin and R2D2 and Princess Amydala were. Plaza de Espana was constructed between 1914- 1929 for the 1929 world expo. It sat abandoned for 20 years after the expo because of the economic hardship caused by the great depression. It is a spectacular site, and is now well used for tourism and other city services.

We visited the Jewish quarter and saw the Santa Maria Cathedral. This is the third largest cathedral in Europe, after St. Peter’s (the Vatican), and St. Paul’s in London.

We enjoyed a meal at our hotel and turned in for the night.

We set out for a one-hour ride from Seville to the region of Huelva, where we visited USISA, a fish canning factory at Isla-Cristina. Our guide Elena toured us through the factory, owned by the Vasquez family, who grew the business over the last several decades by acquiring smaller fishing companies and expanding their canning factory. The new building was built in 2000. There are currently 250 workers employed by the company.

Women only work on the fish processing floor, where they hand process the fish – skinning and fileting it. Many workers drive from Portugal to work at the factory. This hand-processing is the traditional method, and differentiates the product from many others. Oil (olive and sunflower), salt and water are the only items used in the processing. They also produce whole sardines which is rare these days, as tastes are changing and mainly older people enjoy the product.

The fish comes from the Gulf of Cadiz and surrounding coastal areas, but the tuna comes from the open Atlantic Ocean. The EU regulates fishing quotas.

Dry tuna is the most popular product, it is a traditional food for Spain and Portugal. Red tuna is very rare and expensive and all the red tuna caught is sold to Japan. The wholesale price would be 30 euros/kg and a whole fish would retail for 2 million euros.

Processing and cutting tuna is men’s work and three men work at this factory to do this job. They cut tuna twice per week. We saw a demonstration of the traditional method of cutting the fish into quarters. They are one of the only factories that cuts by hand, without electric knives. The method is often passed down from father to son.

We were able to sample many products from the factory such as anchovies, salted sardines, mackerel, melva and dry tuna. 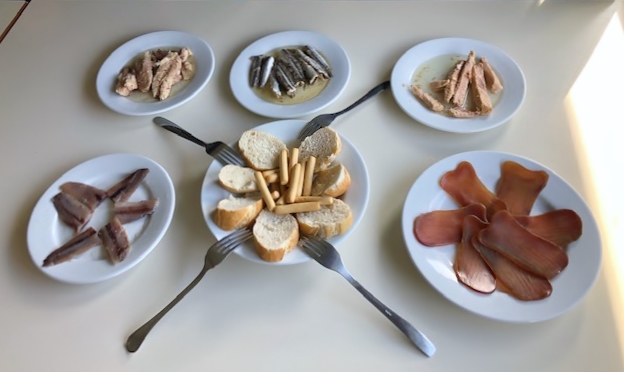 RDO Equipment Co. CEO Tim Curoe announced the company has promoted Chris Cooper to the role of President and introduced several new positions including a Senior Vice President of Field Technology and Innovation, a role that Adam Gilbertson will assume

Montag Manufacturing CEO Anthony Montag talks about how the company is handling supply chain issues, labor issues and what he sees are the future of farmers’ equipment needs.

4 Considerations for Ag Equipment Dealers Before Entering the Construction Market

For ag equipment dealers looking to add construction equipment to their business model, understanding a new equipment market can be tricky

The deadline to apply for the program is March 31