Day 7: Talking about the rural/urban divide

We started the day bright eyed, bushy tailed, and ready to learn!! First stop was at the Chestertown Town Hall where Nancy Nunn, Educator, Outreach, and Advancement Coordinator at the Harry R. Hughes Center for Agro-Ecology, and Kees de Mooy, Zoning Administrator for the Town of Chestertown, spoke to us about the history, troubles and opportunities of Chestertown. Chestertown is located on the Chesapeake Bay and has a large agricultural industry surrounding the outskirts of town. It seems that whenever agriculture and urban areas share a close proximity, there tends to be conflict due to a lack of communication and mutual understanding. This was certainly the case in Chestertown where the main issues focused around high phosphorous levels in the Chesapeake Bay. The town is searching for innovative solutions, which were highlighted later in the day.

Once we wrapped up some discussion about Chestertown, we took to the streets to wonder through the Chestertown Farmers Market.

Hopping back on the bus, we ventured outside of the Chestertown town limits to see some of the great agricultural, agri-tourism and environmental initiatives happening in Kent County. 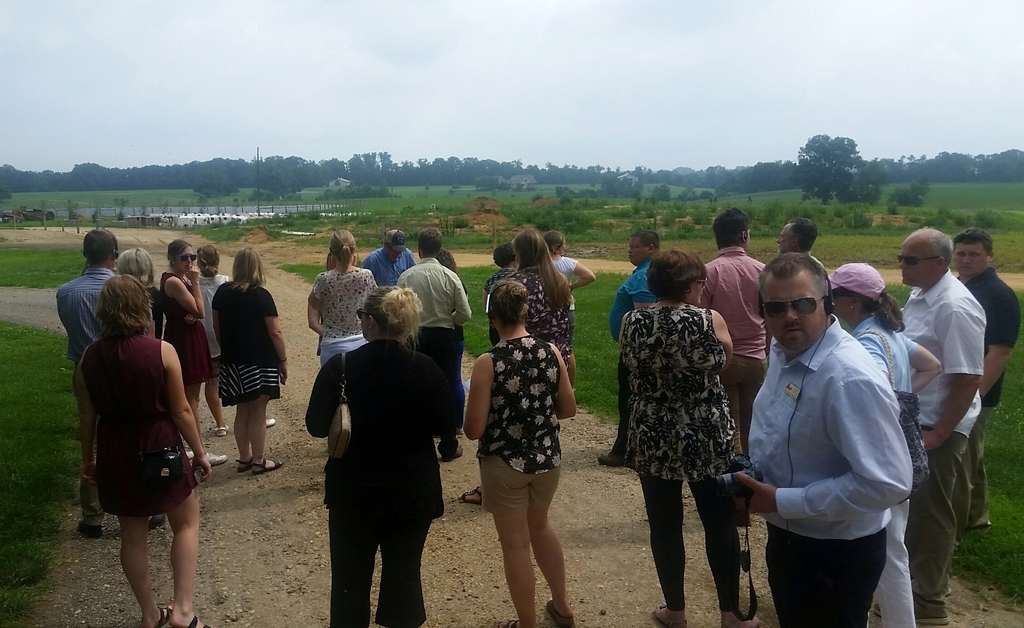 Our second visit of the day took us to Fair Hill Farms, an organic 500-cow dairy owned by Ed Fry and his family. After providing a brief history and run down of the operation, which has been in the Fry family since 1960, Ed took our group on a narrated walking tour of the farm. He explained that while the cropland had been certified organic for several years, the dairy herd had just begun the transition on April 1st of this year. It was interesting to learn about their grazing system and pasture management practices, particularly with that size of a herd. There are not many, if any, organic dairies of that size in Canada, so just the thought of trying to pasture that many cows a minimum of 120 days of the year seemed intense – especially to those in the group from dairy backgrounds!

Also pretty mind-blowing was the fact that while the barns had been renovated or new builds in the last few years, the milking parlour they were using to milk their 500 cows was still the original parlour built in 1960 – a double-5 parallel parlour…yes dairy folks, you read that right! The farm is milking 500 cows with a mere 10 units meaning that the parlour is in operation almost 24 hours a day. As Jen Peart commented after, it certainly makes milking 75 cows at home with 7 units seem not so bad! That said, Ed did say they have plans in the near future to put in a 50-stall rotary milking parlour that will be big enough to incorporate rotary robots someday. 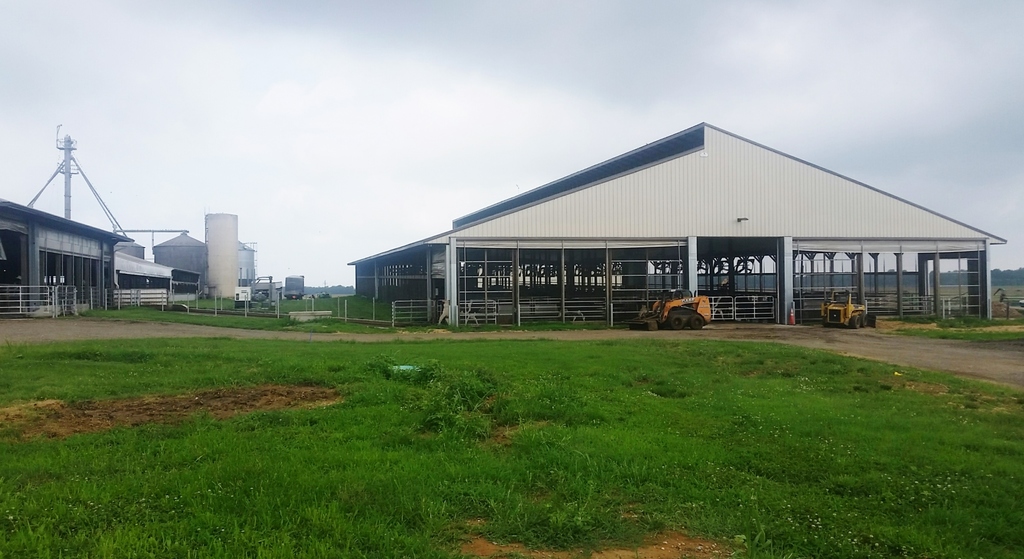 Ed also has a refreshing attitude with respect to the social image presented by farming to the general public, and how to foster the understanding between farmers and urbanites. A great example of this met us on the front lawn in front of the bus – a down cow hanging out under a shade tent with her water and feed. Obviously no dairy farmer wants to have a down cow on display for any tour group; however, as Ed explained, they could have put her out behind the barn, but having her on the front lawn forced everyone on the farm to check in on her and make sure she had what she needed to remain comfortable and hopefully recover. This strategy is obviously awesome in terms of cow care, but also in terms of demonstrating to the general public that sometimes animals get sick, but that they are well taken care of.

Also of interest was the environmental initiatives implemented at the farm. Ed showed us the system they used to separate out the sand and solids from the recycled water used for the flush barn system. Not only is the water recycled, but the sand bedding is also extracted, dried and reused.

The visit to Fair Hill Farms was a great opportunity to see a large, commercial, organic dairy in operation and also learn more about the certification process and environmental regulations associated with dairying in Kent County.

Once we had our fill of dairy, our lovely bus driver Nancy took us to Crow Farm, a vineyard, farmstay B & B and winery. Crow Farms is a third generation farm that was a dairy farm until 2001. It has since been converted to a winery, agri-tourism destination with a 100-head herd of Black Angus beef cattle for good measure. Owners Roy and Judy Crow met the group, and in the blissful cool of their winemaking facility, gave our group a rundown of the farm as it is today. After taking a good look at the farm and how it could be reinvented, the Crows began growing grapes in 2010 and opened their winery in 2012. They have the capacity to produce 5,000 cases per year, 2,500 cases of which are their own wine and the balance is made up of wines they produce for other smaller wineries in the area. They have been fortunate to have received several awards in the last couple of years and have recently been able to expand their reach into California. The farm and vineyard is a beautiful spot and a perfect location for a farmstay bed & breakfast. Building on the theme of rural/urban understanding from our first two stops, at Crow Farm, folks from town are able to come out and spend a night or two at the farm, taking in the farm life and connecting with where their food – or in this case, their wine – comes from. The Crows are very big on educating our urban friends about agriculture, so in addition to the farmstay they use their event “Crowfest” as an education tool, and have long term plans for a more permanent ag education centre. The old milkhouse of the dairy barn now serves as the wine tasting room and retail store, adding to the authentic farm feel of the location. The Crows also use their store to sell their grass-fed beef.

After our tour, the group was treated to a delicious lunch and wine sampling in the old hay barn event pavilion, and, of course, had a little bit of time to stock up on some great Crow Farm wine to take home before heading back on the road to our next stop.

Feeling rejuvenated after a big lunch, we meandered through Kent County’s scenic countryside where we arrived at the Sassafras Environmental Education Center. Emmett Duke, River keeper of the Sassafras River Association, explained current innovative experiments that they are trialing to help restore the Sassafras River. Emmett explained how important it was to create a strong relationship between farmers and the watershed authorities, and that working together to solve problems can benefit both groups.

Located next to the education center is a large chicken farm. The chicken farmer allowed the Sassafras River Association to convert a gully basin into a series of sediment ponds and buffer zones that were arranged in a way to filter phosphorous out of the water. This restoration project is in its early stages of testing how significant phosphorous levels were being reduced, but they seemed optimistic. This partnership approach to reducing phosphorous levels was an excellent example that highlighted the importance of collaboration in order to solve common problems. When we first learned about problems within Chestertown and Kent County, the proximity of urban and rural cultural norms had appeared to be viewed as a problem for agriculture. As we learned today, being located close to urban centers doesn’t always have to have conflict, it can sometimes provide an opportunity to validate cultural practices, display innovation and showcase environmental stewardship initiatives.

We ended the day with dinner at The Kitty Knight House restaurant located along the Sassafrass River. The food was awesome and the view spectacular! The Kitty Knight House is a historic building, and as the story goes, was one of the only buildings not burned by the British during the American Revolution thanks to the efforts of Miss Kitty Knight who talked them out of destroying it.

Once we returned to the hotel, we learned that today was the town of Alexandria’s birthday. In true American festive spirit, that meant a spectacular fireworks display on the water just a few blocks from the hotel. The fireworks were absolutely incredible – like nothing we have seen at home! A fantastic way to cap off our visit to the Washington, DC area!

Tomorrow? Off to Gettysburg, bright and early!