Day 8: Out with a bang! Battles, beers and baseball

The day started off early with a 6:30 departure from Alexandria, Virginia, with a two-hour drive to Gettysburg, Pennsylvania. Our in-flight service was compliments of Tom and Robin and consisted of snacks, moist towelettes and entertainment! There's nothing wrong with a little pampering in the morning. :) The health and wellness team got the competitive juices flowing with an adult colouring contest with our fearless bus driver Nancy serving as the judge! 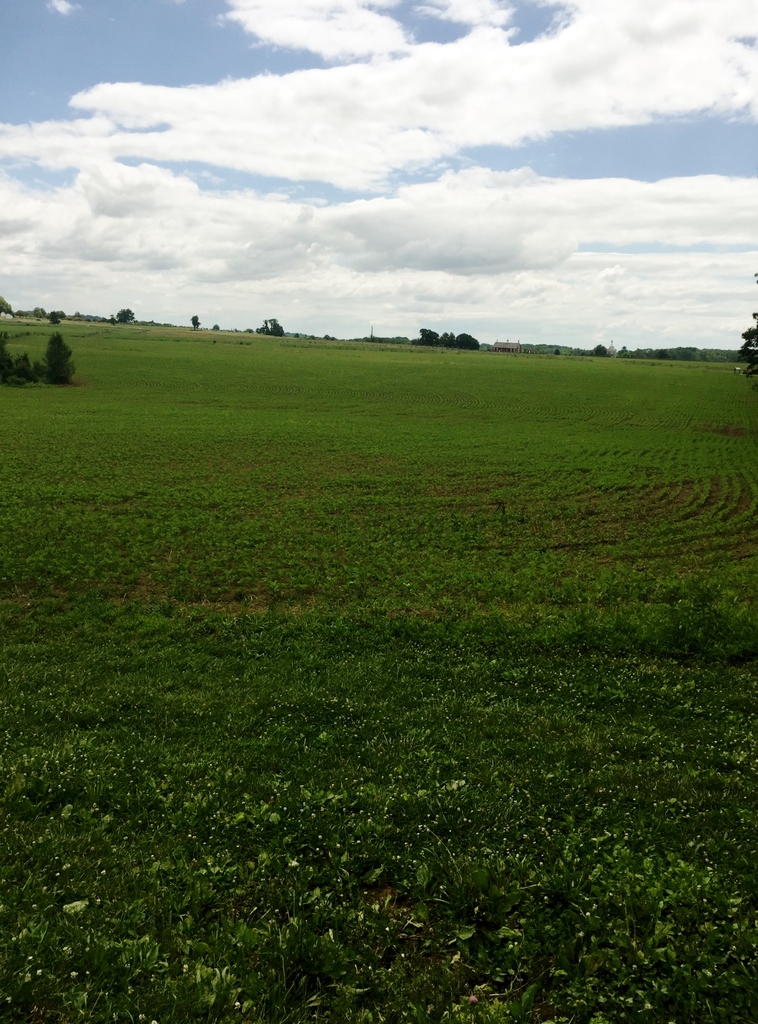 Upon arriving in Gettysburg, it's clear to see that it is still a town very much steeped in history and civil war culture. Evidence of the great battle can still be seen throughout the town with bullet holes in the buildings, the cellars where the citizens waited out the battle, the preservation of historic sites and the many memorials. Great efforts are being made to return the 6,000 acre state park to the state in which it would have been found in 1863. Largely consisting of wooded sites used for firewood and agricultural land for cash crops, it was nice to hear that the state has a good working relationship with the local farming community to still actively farm the land. 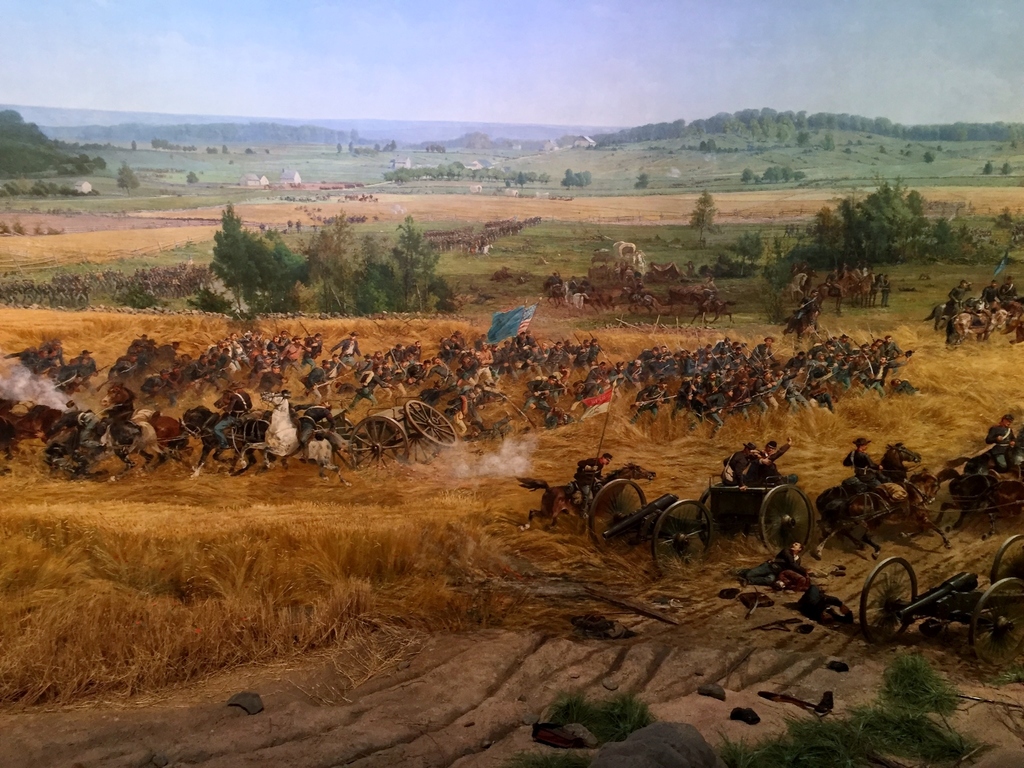 We arrived at the Cyclorama Film and Museum experience where we viewed a film about the battle of Gettysburg during the Civil War. It set the back drop for our day and we finished up in the Cyclorama viewing room.

It was a planetarium-like room with an oil canvas 42 feet high by 372 feet long displayed around the perimeter of the room. The display included an exhibit of props that are so well placed they appear to go into the painting bringing it to life and giving the sense that you are out on the battlefield. 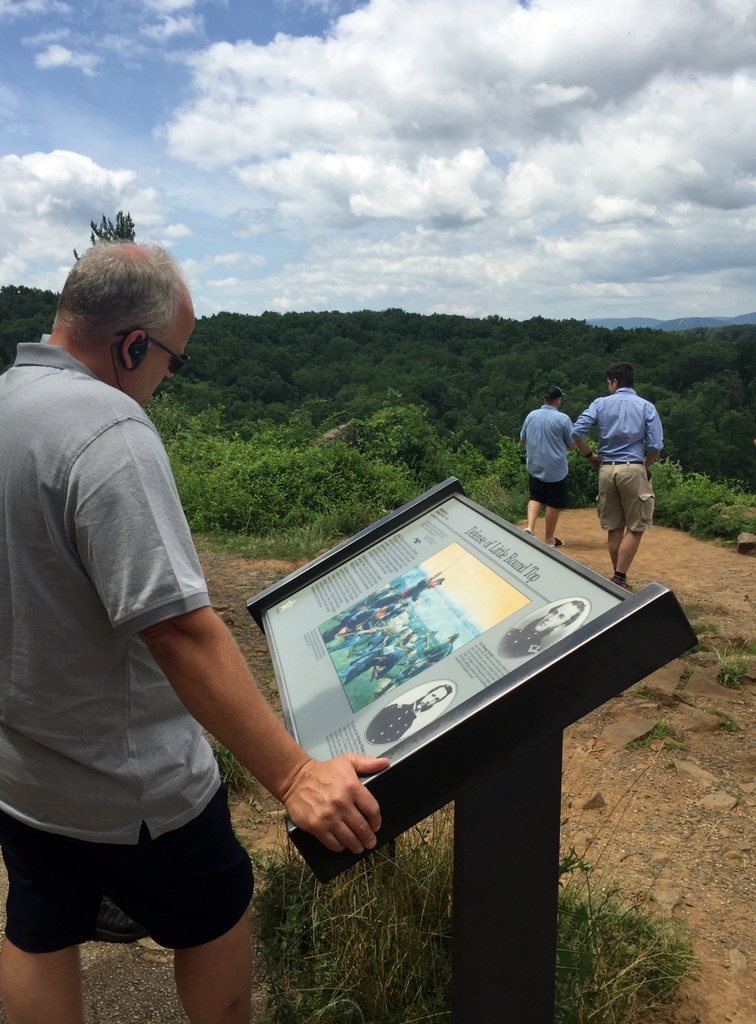 We hopped back onto the bus where we met with Chris Rebmann our certified Gettysburg Battlefield guide. We spent the next 2.5 hrs with Chris immersed in the battle of Gettysburg and walked in the footsteps of the Union army as they fought in a grueling battle against the confederate army for three days from July 1st-3rd, 1863; a battle that would result in 50,000 casualties. We heard many stories of different leaders that fought in that battle and the different ways in which they led theirs troops to victory; some leading from behind and others from the front. There is something very humbling and sobering about standing on the grounds of a great battle; a battle that you know shaped history to create the world in which we are fortunate to live in today.

After hitting the streets of Gettysburg for lunch it was back on the bus to make our way to The Pennsylvania State College. Our bus ride consisted of a lively conversation about how we can apply the examples of leadership we learned about in the battle of Gettysburg to our roles in agriculture and the agricultural community as a whole. There was also the sponsor spotlight highlighting the newly launched "SeCan's growing trust" as well as group time to work on our IAP projects. After checking into the hotel we met our Pennsylvania counterparts from the Rural-Urban Leadership (RULE) Program at a local Spikes minor league baseball game. The hospitality offered by our guests made us feel truly welcomed. The ever expanding network of agricultural leaders has never been more evident. The opportunity to connect and share in a relaxed atmosphere was second to none. The Spikes won the game and we celebrated with fireworks!

Leadership was presented today through the lens of the in battle of Gettysburg. As a class we took away that as leaders we have to be adaptable, confident and willing to accept change. We all have difficult decisions to make everyday; the true leaders accept change and lead their peers in the direction of change.

It sounds like a very thoughtful and profound experiences for everyone.