AALP Class 16 had our earliest start so far this trip, heading out of the heart of Hanoi at 6:20 am to the airport to catch our flight to Bangkok, Thailand! Upon arrival, we maneuvered through the chaos of the busy Bangkok airport, reminding us of home and the hustle and bustle of the Toronto airport. We were greeted by our tour guide, North, and headed out on a tour of the city!

North treated us to a bunch of great trivia and facts about the city during our slow slog through traffic. An interesting fact he shared is that Bangkok is not the official name of the city, the actual name is Krung Thep Mahanakhon Amon Rattanakosin Mahinthara Ayuthaya Mahadilok Phop Noppharat Ratchathani Burirom Udomratchaniwet Mahasatham Amon Piman Awatan Sathit Sakkathattiya Witsanukam Prasit, which is the longest name for a capital city in the whole world! Considering its length, it actually has a simple meaning: Freedom. Thailand has been a free country and has never been occupied by or under the control of another country!

North also informed us that Thailand is a Buddhist Country, with 95% of its population practicing Buddhism in 33,000 temples across the country. And in the three temples we visited today, each had well over 50 Buddha statues throughout the temple!

And finally, North informed us that Thailand has three seasons ... Hot, Hotter, and Hottest! With humidity sitting at 70% or higher!

To add to the hot temperatures, their food also has quite a bit of kick! North suggested that, as foreigners, instead of asking for a "Little bit of spice," we should ask for no spice as that will be comparable to a little spice at home.
After savouring our first Thai Food of the trip for lunch, we headed out to tour the temples. We started at the Reclining Buddha Temple, seen below: Within the temple, King Rama III started the first medical University. There were drawings on the plaster inside one building depicting the different areas of the body for massage.The actual Reclining Buddha is 46 meters long, built of brick and plaster and covered with real Gold Leaf! Inside the Reclining Buddha Temple itself, we also visited the Ornamental Hall to take in another Buddha. We learned that many of the monuments inside the temple contain the ashes of King Rama the I through VIII, as well as some other important members of the royal family. We learned that the Thai people know the name of the King, but to make it easier for the rest of the world they started referring to the King as "King Rama" and identified each in succeeding numerical order.

We then walked to the canal and crossed over to visit The Temple of Dawn, built by King Rama II. It was currently getting a facelift, but was truly breathtaking all the same. As we waited for the water taxi to return us to the main shore, we noticed two monks also waiting for the boat and asked North to tell us a little about monks. He informed us that most males practicing Buddhism will become monks to show their future wife that they have learned to be a good man. If they are under the age of 20, they can become Novice Monks, adhering to only 20 Buddhist rules; or after their 20th birthday they can study and practice the 227 Buddhist rules to become a monk. Usually, they will practice for a minimum of three months, sometimes more and sometimes a little less depending on their financial situation.

North shared with us the five Moral Precepts of all practicing Buddhists, and they are as follows: 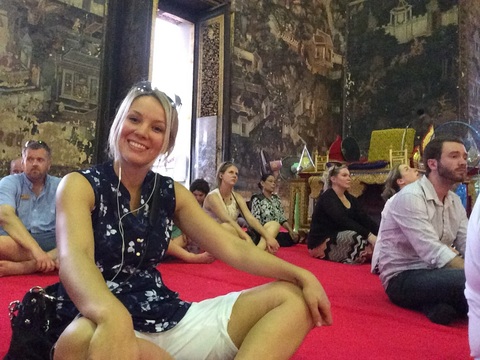 And to round out our temple tours, North showed us the Wat Suthat Thepwararam Temple, which happens to be the temple he worships at. It was built during the reign of King Rama I and took three generations to complete! King Rama III was responsible for a significant amount of the final architecture and Buddha statues. We learned that sitting Buddha statues with one hand in the lap and one on their knee is to drive away evil and those with two hands in their lap are for meditation.

We finished off a great but exhausting day of exploring and learning about the Buddhist Temples with a delicious, relaxing dinner before heading to the hotel to check in. Some classmates were feeling the exhaustion from a long day in the heat and opted for an early evening, while others caught a second wind and headed out to explore the city and the Night Markets!