DAY 7 Bucharest - Costesti - Saliste - Sibiel - Sibiu. Much of the day spent on the bus today. Leaving Bucharest the group traveled northwest across a mountain range to Transylvania, to a 1900 ha cereal farm growing wheat and soybeans, located near Costesti, on the way to Sibiu. Much of the acreage is rented from small subsistence farmers enabling the cultivation of larger tracts of land up to 120 ha in size. Geography is much different in this part of the country. On to a traditional sheepfold, where the group learned about the traditional way of life for shepherds. Four of them do it twice a day, 7 days a week, 365 days each year! Much of the milk is used for cheese production and the group was able to try fresh and aged product. 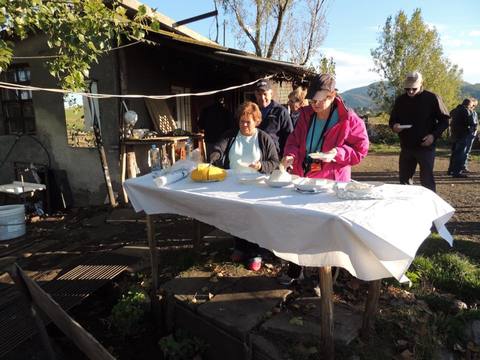 From here it was only a few kms to the village of Sibiel, part of the ethnographical area of Marginimea Sibiului, where the Romanian shepherds created and are still supporting a strong, original culture. Here the group met a local farmer with eight head of cattle, (four cows & four calves), chickens and three pigs, all kept in a building(s) attached to the house and similar to all the neighbours) and supported by plots of land outside the village for growing feedstock, grapes and vegetables along with a forest for harvesting wood for heating their home.

Just down the village street we enjoyed a traditional Romanian dinner including homemade plum and blueberry brandies and wine. The day ended in Sibiu, the former European Capital of Culture (2007). Sibiu is one of the best preserved medieval cities in Romania, and has been carefully restored. The city is known to have existed from the 12th century, rising in prominence to become an important trading town inhabited by Saxon merchants who formed themselves in guilds, fortifying the town to protect its wealth.

DAY 8 Sibiu – Viscri - Sighisoara The day started with a wonderful walking tour of the historic fortified city area. The group then boarded the bus for a visit to a World Vision Foundation project here in Romania – Agrovision, a project farm created to present to and teach local subsistence farmers how to make the transition to a more commercial venture. 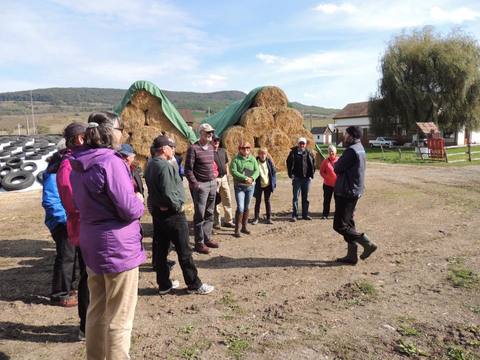 The farm has about 40 head of cattle and must self-finance itself. Meeting with the farm manager, it was apparent from his comments and looking around that this project is less than successful. Local farmers are just not interested in learning new ways or making the effort to work hard to be successful.

Back on the bus to Viscri village. This Saxon village is included on the UNESCO World Heritage list, and is one of the villages in this country where Prince Charles, the Prince of Wales, owns a traditional Romanian house. It is said that he visits two times each year and it is used as a guest house when he is not in residence. The AALP Alumni and Friends group enjoyed a traditional lunch prepared by locals in the village and, as most times, the meal was accompanied by homemade plum brandy (100 proof) and wine. Following lunch, they climbed on horse drawn carriages for a tour of the village and surrounding area. The group then visited a traditional blacksmith and brick-making shops and the village’s fortified church. 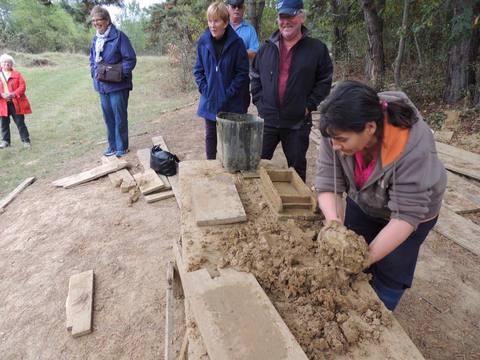 A number of the group climbed an upward stone passage and many rickety steps to the top of the fortified tower for a wonderful view of the surrounding countryside. 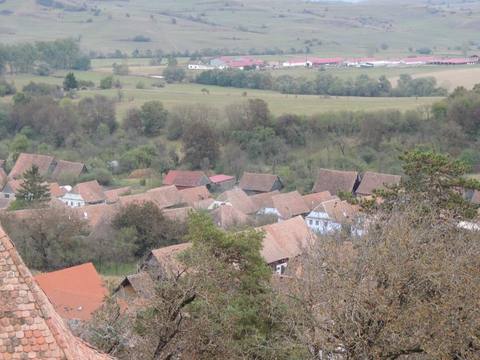 A bit of history… the German colonists (the Saxons) arrived in the territory of Romania 800 – 900 years ago when invited by the new master of Transylvania, the Hungarian king. They occupied the fertile valleys, bringing the feudal system to the area and laying foundations for villages, towns and cities. The mountains, higher grounds and the land close to the borders of Transylvania remained Romanian however, or as they called them at the time, Wallachian. Nowadays, following the Red Army invasion in 1944 and the communist era, most of the German population is gone. Tourists now have the opportunity and privilege to enjoy an enormous open air museum. The area left by the Saxons consists of naturally preserved architecture and over 150 medieval fortified churches. Nowhere in the world can one find so many reinforced churches and fortresses. Seven of them are included on the UNESCO World Heritage list.

The last leg of travel today saw the group transfer to Sighisoara, a medieval citadel inhabited continuously ever since its settlement in the 13th century by German colonists. Another very interesting day for this group of AALP alumni and friends of the program and organization!

Syngenta Canada Inc. is pleased to announce the launch of Vayantis®, a next-generation fungicide seed treatment that provides comprehensive Pythium protection in corn and soybeans.

Polaris Off-Road, the world leader in powersports and off-road innovation, today unveiled its 2022 model year lineup packed with rider-inspired innovations and advancements across the RANGER, RZR, GENERAL and Sportsman brands.

Construction of broadband infrastructure has begun in Simcoe County, which will connect more than 11,000 homes and businesses to fast, reliable internet service. This will help create more economic and educational opportunities in rural, remote and underserved areas of the county.

In an 18-month research project to identify the types and amount of plastic packaging and products used in the agricultural sector across Canada, Cleanfarms has released a first-ever national benchmark report that documents how much of these plastic materials are generated by sector and by region across the country.

Establishment of a Grocer Code of Conduct in Canada

Following last week’s Federal-Provincial-Territorial (FPT) meeting of Canada’s Ministers of Agriculture, the Canadian Horticultural Council (CHC) expresses its support for the establishment of a Grocer Code of Conduct in Canada, which aims to bring greater fairness to food retail practices.