DAY 5 - Overnight train ride from Budapest, Hungary to Bucharest, Romania saw the AALP Alumni and Friends tour group arrive at noon in Romania. The overnight train ride was a first for a number of the travelers. It was interesting to note that two train cars (in line) with berths were from different originating countries and so had different passenger service levels. One group enjoyed cloth towels and breakfast served along with coffee. The other enjoyed very little - no service, no breakfast and no washing towels. In this latter car, when requested members of the group were given a paper towel and a disposable toothbrush to use! 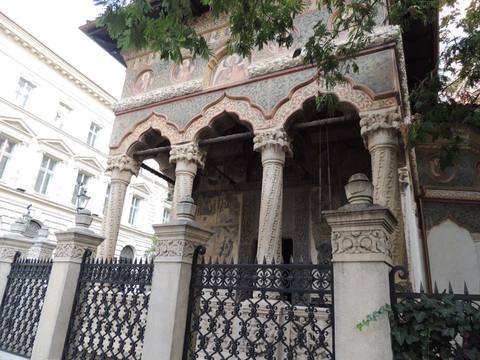 Afternoon walking tour of Bucharest's city centre and a tour of the People's House, the seat of political and administrative power, a multi-purpose building containing both chambers of Romania's Parliament. 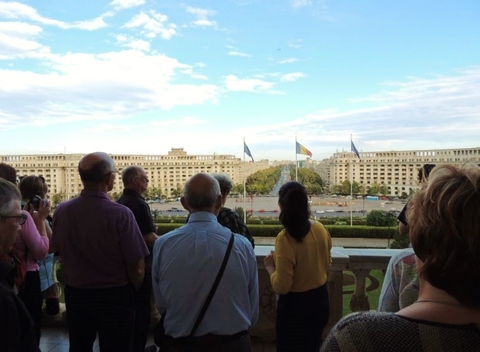 A welcome dinner at one of the city's most famous restaurants capped off a very interesting day. DAY 6 - Bucharest - Afumati - Pantelimon - Bucherest. This morning the group had a presentation and toured the Romanian DuPont Pioneer Seed Plant where they produce corn, sunflower and soybean seed. 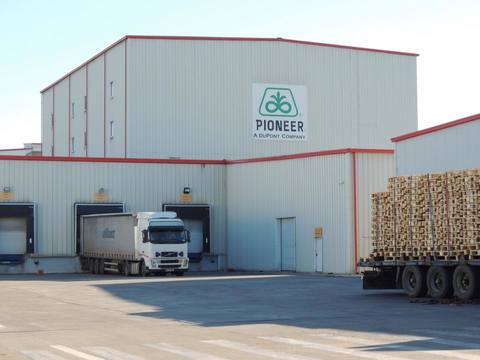 The afternoon saw the group visit a large Holstein dairy farm, started under the communist regime in 1973. Following the fall of communism, it was purchased privately by one of the former veterinarians on the farm. Now there are about 500 head, including approximately 250 milking cows producing more than 5000 liters per day. 70% of the milk produced is sold to a processing facility and 30% is sold through several milk dispensers (of unpasteurized milk) in Bucharest. One of these dispensers was located on the farm and provided an opportunity for the group to see it 'in action'. In June 2009 the farm opened the first 'Farm Park' in Romania, close to the dairy farm, providing an opportunity for school children to learn and see first hand small animals, birds and parts of the farm 'in action'.

The group enjoyed a lunch prepared at the Farm Park before heading back to Bucharest for a free late afternoon and evening in the city. Tomorrow the group leaves the city of Bucharest for Sibiu.

The Nourish Network releases Annual Trend Report for Food, Beverage, and Agriculture for 2022

Nourish Food Marketing, Canada's only full-service marketing agency working exclusively with food, beverage, and agricultural clients, in partnership with Kahntact, leading marketers in the agriculture, food, and life science sectors, have released their annual Trend Report. After an unforgettable year for all of us, the 2022 Nourish Network Trend Report expands on 11 unique trends coming out of this shared global experience and suggests how we can start looking ahead and start thinking about the beginning of the end.

UPL Ranked No.1 For Sustainability Performance Amongst Its Peers For Second Year Running

UPL Ltd. has been ranked by Sustainalytics as the highest performing top-tier global crop protection company for overall sustainability performance in the 2021 ESG Risk Rating. With significant improvements across multiple categories, this achievement recognises the work that UPL is doing to Reimagine Sustainability within the global food system. Sustainalytics provides environmental, social and governance (ESG) research, ratings, and data to institutional investors and companies, and produces an annual report into the sustainability performance of companies working in a range of sectors. The criteria assessed by Sustainalytics includes UPL's successes in managing Corporate Governance, Community Relations, Business Ethics, and Carbon footprint.

Can I Plant Corn in Rotation After Canola?

Planting corn after a crop of canola is generally not recommended, and the reason why has to do with beneficial fungi living in the soil. However, some studies and anecdotal experience in Ontario have shown that this rotation is not always problematic.

The City of Hamilton voted to protect 1,310 hectares of land