After an early breakfast we left Mumbai for a 3.5 hour drive to tour Syngenta Foundation Villages located at Jawahar in the Thane District. The drive took us up into the arid hills through many small villages. Although the fields were bare now, this district is a traditional rice growing area in the monsoon season from June to September.  In the dry season villagers make bricks from the heavy red clay soils, and take hay stored in stacks and bale it with the help of oxen, to be sent as feed to the cities. We arrived at the Syngenta facilities at 11:00 a.m. where we were welcomed with a hot drink and a quick orientation. The Syngenta Foundation Villages partner with NGOs that have the common goal of helping small land-hold farmers of 1-2 acres, explore new opportunities for their lands in the dry, non-monsoon season.  The hopeful outcome is that the farmers have a new source of revenue to keep them on the land and not migrating to large cities like Mumbai.

After the orientation meeting we loaded into 5 land rovers to travel the rural roads and see the farmers’ projects. Each project involved 4-8 farmers using new technologies like drip irrigation, mulching and shade covers to grow new crops from tomatoes to gourds to jasmine and cabbages. For only being in the second year of the project the AALP class saw some beautiful, well tended produce.  All the Indian farmers agreed that the new technologies and teaching has made their farms more viable. These farmers truly are leaders pioneering new techniques and sharing their learnings with neighbouring farmers. The highlight of the day was interacting with the wonderful, friendly people of the villages, some of whom had never met with white people before! As we head back to the booming night life of Mumbai we remember that the villagers we met will be safely inside to avoid the prowling tigers and leopards of a countryside night. 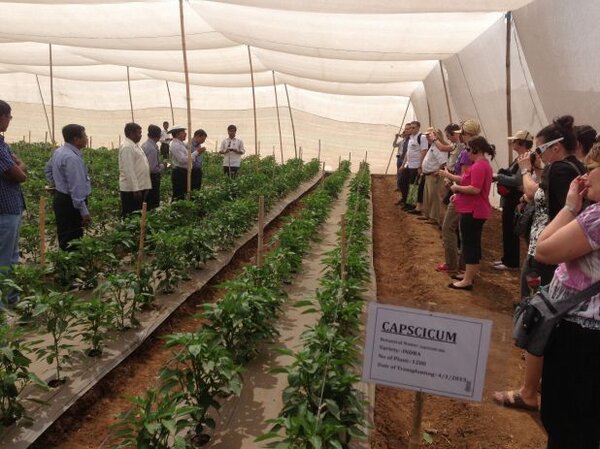 Following the confirmed finding of African swine fever (ASF) in the Dominican Republic in July 2021, ASF has since been confirmed in Haiti.

Agriculture in the Classroom Manitoba (AITC-M) has launched Follow the Farmers, a new virtual farm tour program for students in Grades 3-6. “This new program will help bring farming and agriculture to classrooms across the province in a time when getting out to a farm is just not possible,” said Sue Clayton, AITC-M’s Executive Director. “Since students can’t go to the farm, we’re bringing the farms to them, giving them the opportunity to learn, ask questions and increase their overall ag literacy.”

The Grain Growers of Canada would like to congratulate Prime Minister Justin Trudeau and the Liberal Party of Canada on their results in yesterday’s federal election.

The governments of Canada and Ontario are investing $2.5 million to turn innovative ideas and solutions into marketable products that will strengthen Ontario’s agri-food sector and ensure Ontarians continue to have access to safe, high quality food the province is known for.

De Dell Seeds Has Turned Over a New Leaf

De Dell Seeds has turned over a new leaf, and transferred its ownership and management to the next generation. Founded by Vince Trudell in 1999, De Dell Seeds has grown and evolved over the past 22 years while maintaining its family roots.