After walking through the market looking at fresh meat, vegetables and fruit, we walked along the gardens and took in a breath of agriculture. The gardens were hand tended and well looked after. We saw lots cabbage, snap beans, tomatoes, lettuce, various Asian greens and herbs, guava, broccoli, radish and lots more! 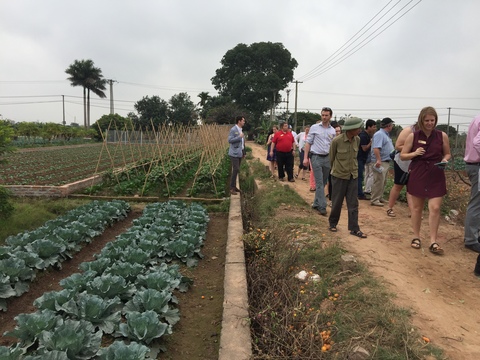 We then gathered at a local farmers house to enjoy a tea break. 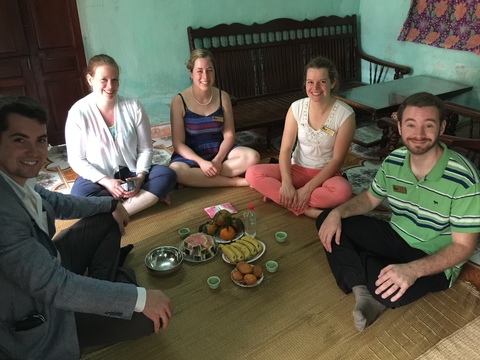 The class heard a sponsor spotlight from Jen Kyle and Aaron Breimer on the Ontario Farmer along the bus ride to the village. In an age where print newspapers are in decline, it's nice to hear that that the Ontario Farmer is still the preferred source of news for the agriculture industry in Ontario.

Back in Hanoi, our tour guide Danny showed us some sites of the city and gave us a government, war and Vietnamese culture lesson. We stopped at Ho Chi Minh Mausoleum square where we walked around looking at the government buildings, tomb of Ho Chi Minh and the Canadian Embassy. The influence of Ho Chi Minh on the history of Vietnam's independence from the French was reflected upon as it was pivotal in the current independence of the country from foreign rule. 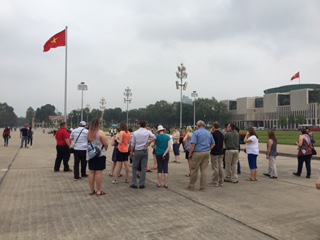 Lunch was served at a traditional Vietnamese restaurant, called Ngon Villa, where the group reflected on the mornings tours and stops.

In the afternoon we returned to the hotel to meet with Nicholas Drouin, the First Development Secretary and Tran Tuan Anh, trade commissioner both from the Canadian Embassy in Vietnam. Nicholas and Tran gave a great presentation to the class about the current development and trade missions Canada is engaging in Vietnam. They outlined the importance of Vietnam as a trading partner as it is the fastest growing economy in Asia. Vietnam values Canadian quality import products such as seafood, wheat, beef and soybeans. 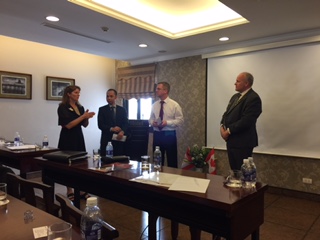 In late afternoon the class had an opportunity to take to the streets and embarked on a cyclo tour around the downtown and market areas in Hanoi.