This is no record that will make the evening news, or ever the local newspaper, but a first none the less. My cousin joined me in the field for first ever 10 furrow round.  Up until now this field had never seen more than my 5 furrow plough.  But on…

The CFFO Commentary: Farmers Hope for Rain to Improve Prospects for all of Agriculture

The weather has been dominating the concerns of farmers across Ontario. While conditions vary widely from region to region, there is no doubt that a great many farmers are very concerned about the conditions of their crops. The impact of heavy drought conditions impacts all of agriculture.

The most obvious group that is being impacted are grain and oil seeds farmers.…

In an increasingly competitive and cost-conscious agriculture and agri-business climate, sometimes there are unintended results for other organizations. Today, farmers and food processors are reconsidering the concept of waste and are seeking to turn all their raw materials into marketable or reusable items. The unintended result of this movement is that the Ontario Association of Food Banks is short…

It’s hard to believe that we are at the end of our AALP Class 14 North American Study Tour today.

Our way home north started with a stop in…

Will and Marian led us to the Canadian Embassy in Washington, DC for a briefing from the Counsellor (Agriculture), Economic and Trade Policy. Arriving at the Embassy was much like crossing the border – a security screening and random passport check, all very pleasant, no issues. Dressed in our…

The wheat is off, the crops are sprayed, the pressing field work is behind me.  There is always more to do, but its no longer time critical.  Sure i can pull some weeds in the field, but it doesn't need to be done today.  The wheat stubble needs to be plowed, but no rush, I would prefer a good rain to sprout the lost wheat before I start anyhow.  Sure the free range chickens and turkeys need constant attention, but that has become no different than doing the laundry, its just part of life.…

Not far from the Liberty Bell in the heart of Philadelphia is the Reading Terminal Market.

Rich in history, this “urban farmers' market” is home to 77 owner-operated businesses that provide a wide variety of food products ranging from local produce to meat, dairy, fish and baked goods.  As well…

We were off to a comfortable start this morning, with Dave the bus driver ready to roll at 8:30 headed for the Wye research station. Once there we met Dr. Russell Brinsfield and Ken Staver who briefed us on the watershed issues surrounding the Chesapeake estuary, the body of fresh water with the largest land to water…

We welcome a lost sheep back to the fold

Michel Dignard, who could not be with us for the first three days of the tour met us in Newark and we are all very happy he did make it for the balance of the program.  Our bus left Newark this morning with a full schedule of visits to a number of organic and sustainable agricultural operations in… 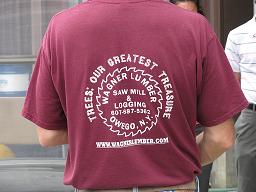 From Ithaca to New York City (via Scranton, PA)

AALP Class 14 woke up in Ithaca, NY to a much more comfortable ambient temperature than we experienced the previous…

AALP Class 14's North American Study Tour began at the Rural Ontario Institute office, at the  EastGen facility Guelph where we boarded our bus. After a quick stop to pick up some of our remaining classmates in Niagara-on-the-Lake we were back on the…

The future of farm programming in Growing Forward 2 remains unannounced, allowing more time for farmers and farm groups to influence the future. This summer is a vital opportunity for farmers and other stakeholders to provide their input on the safety net and strategic investments that support them in different ways.

Agriculture programming in Canada is driven by…

A Slow Start to Wheat Harvest

I almost made my first round with my R52 Gleaner, but didn't quite make it.
It started out well, ran a moisture test from the front headland at under 14%. Then I started adjusting the concave to get a better sample. Stopping every 100 ft to check to see how much grain I was throwing over. Opened up the fan damper, tightened up the concave again, adjusted the sieve. Still a bit of chaff and heads in the bin, but Beacher Wheat is hard to harvest. Now starting to put some material through…

Many beef and dairy producers in Alberta protect livestock feed by covering it with special plastic film widely used in agriculture today.

Nova Scotians are encouraged to submit their comments on what government can do to help people have access to healthier, local food.

Bill Zylmans, Chair of the Canadian Potato Council (CPC) and Rebecca Lee, Executive Director of the Fruit and Vegetable Growers of Canada (FVGC) are happy to share the upcoming retirement of David Jones in March of 2023.

The canola’s role in helping reduce greenhouse gas (GHG) emissions took another step forward, with the final rule to create a pathway for canola oil to be used in advanced biofuels under the Renewable Fuel Standard (RFS) program in the United States.

A new partnership between an online work-integrated learning platform and Canada’s Food & Agri-Tech Engine will introduce young people to the potential of careers in the sector.