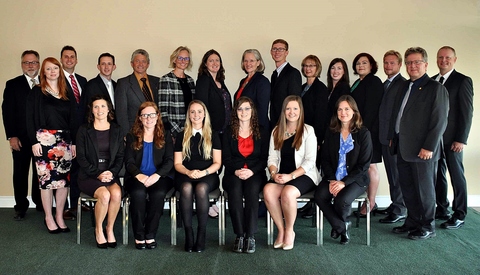 A group of 18 agricultural professionals began their leadership journey as part of the Advanced Agricultural Leadership Program (AALP) with a three-and-a-half day session in Guelph, Ontario.

The diverse group of leaders-in-training, which includes primary producers as well as those in the banking and insurance industries, regulatory affairs,…

When things don’t go according to plan

Each summer DVM students from the Ontario Veterinary College at the University of Guelph delve into hands-on, practical experience at veterinary clinics across Ontario and additional locales during their Externship Veterinary Course. Funded by the Ontario Ministry of Agriculture, Food and Rural Affairs (OMAFRA), students must complete an eight-week Externship Course between third and fourth year in a rural veterinary practice that works with food animals…

After 7 flights, 2 countries, 5 hotels, 4 different buses and a dozen or more farm visits, we are home again! What an adventure we all shared over the last 12 days. We experienced so much as a class, whether it was learning new leadership skills, to eating crickets, to meeting with fellow Canadians working in Vietnam. We also have a new appreciation for how certain foods are grown – like bananas, coffee, tea, coconuts, rice and pepper (to name a few); foods that many of us enjoy…

Today we left the big city lights of Bangkok for the countryside. How refreshing to step out of the bus onto Baan Susan Chamchoen Farm and meet the owner Mr Somsak and his wife. With great passion and enthusiasm he toured us through his mixed fruit farm, combining agro tourism with fruit production and 20 value-added products. The King, a great supporter of agriculture, had advised all farmers to diversify. As such, Mr Somsak has a unique intercropping system combining  banana, coconut and…

Temples and Snakes and Boats...Oh My!

Battling through the chaos and heat of Bangkok, Class 16 spent a full day experiencing some of the interesting sites in the city.

Our first stop of the morning was at the Red Cross Snake Farm, nestled on a 'quieter' side street right in Bangkok. The Snake Farm is a part of the Queen Saovabha Memorial Institute and the Thai Red Cross Society. In the early 1900s, one of the King’s daughters died of rabies. At that time, there were facilities around the world that had made…

AALP Class 16 had our earliest start so far this trip, heading out of the heart of Hanoi at 6:20 am to the airport to catch our flight to Bangkok, Thailand! Upon arrival, we maneuvered through the chaos of the busy Bangkok airport, reminding us of home and the hustle and bustle of the Toronto airport. We were greeted by our tour guide, North, and headed out on a tour of the city!

After a great night’s sleep at sea, we got energized for the day ahead with a group Tai Chi lesson on the top deck of the Victory cruise ship. We enjoyed coffee and tea and a light breakfast while we made our way to Thien Canh Son cave, which means mountain landscape in the heavens. The cave is located on Bai Tu Long Bay and set below a stone cliff. It was…

A tour through Ha Long Bay

The day started early on the bus on route to Ha Long Bay. In between class discussion on graduation and learning about the skills and attributes of leaders that inspire us, we stopped at a rice paddy and vegetable farm (onions, lettuce, cabbage, Chinese stem mustard, Poi spinach, basil). We were all surprised to learn that the majority of small scale rice farmers are not supporting their families through farming, but have a day to day job, and the rice they produce serves merely to put food…

After walking through the market looking at fresh meat, vegetables and fruit, we walked along the gardens and took in a breath of agriculture. The gardens were hand tended and well…

Before heading to the airport, we began with a tour of a local supermarket newly built underground. Owned by a Thailand company, this supermarket was very similar to the supermarkets we have in Canada. This…

What an amazing day we had experiencing the agriculturally rich area of Da Lat.

Our first stop was a family-owned fresh-cut flower farm located just outside of Da Lat. The flowers would be cut early in the morning and would be shipped up to Ho Chi Minh City. The main flowers grown on the farm were roses, lillies, and gerberas.

We then ventured to a cricket farm. They harvest the male crickets when they three months, and leave the females to produce offspring. Crickets…

As with all good travel plans, there must be some last-minute changes and February 18th was one of those days with our flight to Da Lat delayed by a few hours. All the better though, as our ever-thoughtful guide for the Ho Chi Minh City component of our trip, Jessica, had several adventures lined up to make use of the extra time. The people who missed out on the cyclo journey through the city the previous day had the chance to take an hour cyclo ride; others took the chance to hang out,…

Today was an exciting day! We headed north out of the bustling, vibrant city of Ho Chi Minh and headed towards the Cu Chi region. We were all looking forward to seeing a more rural part of Vietnam. Our travels today took us to a rubber plantation, a hi-tech research park, a worm and cow farm (we'll explain that connection in a bit) and then finished off our day with a history lesson about the Vietnam war while exploring the Cu Chi tunnels.

Our AALP class woke this morning in Ho Chi Minh City, Vietnam, 12 hours ahead of our families and friends at home in Ontario and the inaugural Canada's Agriculture Day. The seventh seminar stop on the AALP Class 16 leadership journey took place from January 15 to 17th 2017 at the Crowne Plaza hotel in Niagara Falls. Located on the bustling Fallsview Avenue, the hotel overlooked the breathtaking Canadian and American Falls, and provided a great setting for the full seminar agenda.

Julie Westeinde, from Breakthrough Learning Associates in Ottawa, led the group of twenty-six participants through an all-day workshop on conflict resolution that…

Due to the uncertainty around the ongoing COVID-19 situation, the SWOPC Planning Committee has made the tough decision to cancel SWOPC 2022.

On behalf of the Grain Growers of Canada (GGC), we would like to congratulate Prime Minister Justin Trudeau on the appointment of the new Cabinet announced this morning.