A tour through Ha Long Bay

The day started early on the bus on route to Ha Long Bay. In between class discussion on graduation and learning about the skills and attributes of leaders that inspire us, we stopped at a rice paddy and vegetable farm (onions, lettuce, cabbage, Chinese stem mustard, Poi spinach, basil). We were all surprised to learn that the majority of small scale rice farmers are not supporting their families through farming, but have a day to day job, and the rice they produce serves merely to put food…

After walking through the market looking at fresh meat, vegetables and fruit, we walked along the gardens and took in a breath of agriculture. The gardens were hand tended and well…

Before heading to the airport, we began with a tour of a local supermarket newly built underground. Owned by a Thailand company, this supermarket was very similar to the supermarkets we have in Canada. This…

What an amazing day we had experiencing the agriculturally rich area of Da Lat.

Our first stop was a family-owned fresh-cut flower farm located just outside of Da Lat. The flowers would be cut early in the morning and would be shipped up to Ho Chi Minh City. The main flowers grown on the farm were roses, lillies, and gerberas.

We then ventured to a cricket farm. They harvest the male crickets when they three months, and leave the females to produce offspring. Crickets…

As with all good travel plans, there must be some last-minute changes and February 18th was one of those days with our flight to Da Lat delayed by a few hours. All the better though, as our ever-thoughtful guide for the Ho Chi Minh City component of our trip, Jessica, had several adventures lined up to make use of the extra time. The people who missed out on the cyclo journey through the city the previous day had the chance to take an hour cyclo ride; others took the chance to hang out,…

Today was an exciting day! We headed north out of the bustling, vibrant city of Ho Chi Minh and headed towards the Cu Chi region. We were all looking forward to seeing a more rural part of Vietnam. Our travels today took us to a rubber plantation, a hi-tech research park, a worm and cow farm (we'll explain that connection in a bit) and then finished off our day with a history lesson about the Vietnam war while exploring the Cu Chi tunnels.

Our AALP class woke this morning in Ho Chi Minh City, Vietnam, 12 hours ahead of our families and friends at home in Ontario and the inaugural Canada's Agriculture Day. The seventh seminar stop on the AALP Class 16 leadership journey took place from January 15 to 17th 2017 at the Crowne Plaza hotel in Niagara Falls. Located on the bustling Fallsview Avenue, the hotel overlooked the breathtaking Canadian and American Falls, and provided a great setting for the full seminar agenda.

Julie Westeinde, from Breakthrough Learning Associates in Ottawa, led the group of twenty-six participants through an all-day workshop on conflict resolution that…

Guelph, Ontario, Nov. 3, 2016–AALP Class 16 met up in Toronto on October 23, 2016 with our LEAD New York counterparts for a jam-packed three-and-a-half days together looking at provincial/state political processes, urban society and media.

On Sunday, after becoming acquainted with one another, our stateside friends hosted us for the evening with many of the delights that New York has to…

Day 13 Brasov - Bucharest: The AALP Alumni and Friends Tour group are bound for Bucharest and the airport today for their flight to Toronto. The group left Romania today in the rain. It was a wet walk from the hotel to the bus but the group made it only a little worse for wear. Three hours to the airport and the flight to Frankfurt then on to Toronto. It has been a worthwhile trip for all and one each of them will remember for some time!… What isn’t subsequently used in their dairy, beef,… 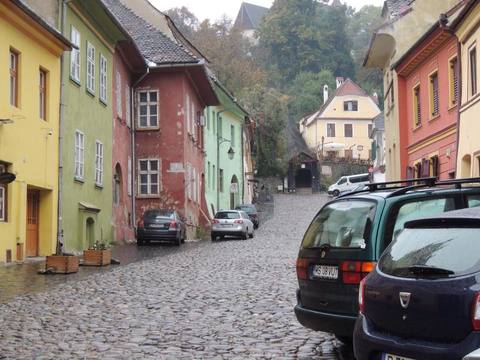 DAY 7 Bucharest - Costesti - Saliste - Sibiel - Sibiu. Much of the day spent on the bus today. Leaving Bucharest the group traveled northwest across a mountain range to Transylvania, to a 1900 ha cereal farm growing wheat and soybeans, located near Costesti, on the way to Sibiu. Much of the acreage is rented from small subsistence farmers enabling the cultivation of larger tracts of land up to 120 ha in size. Geography is much different in this part of the country.…

DAY 5 - Overnight train ride from Budapest, Hungary to Bucharest, Romania saw the AALP Alumni and Friends tour group arrive at noon in Romania. The overnight train ride was a first for a number of the travelers. It was interesting to note that two train cars (in line) with berths were from different originating countries and so had different passenger service levels. One group enjoyed cloth towels and breakfast served along with coffee. The other enjoyed very little - no service, no…

DAY 3 - The group traveled from Eger to Nagyrede to Szilvasvarad and back to Eger. Today the group visited Bukk Naytional Park, north of Eger. Established in 1976, it is the largest national park in Hungary and 97% of the area is wooded. Before heading to the park, the group visited the National Lipizzaner Horse Stud Farm to see these magnificent horses up close and personal. The breeding of Lipizzaner horses in Hungary began in the early 1800s. The group was carried around town in carriages…

DAY 1: The AALP Alumni and Friends Tour 2016 got underway on Friday, Sept. 30, with a "Welcome to Hungary" dinner on the Danube. Twenty-two AALP and AGLead New York alumni and friends raised a glass at dinner to celebrate the start of their 14 days in Hungary and Romania. Friday saw the group visiting a number of sites in the City of Budapest with the history going back more than 2000 years. The group then traveled to rural Hungary to learn more about typical farm and rural life.…

Guelph, ON, July 25, 2016 - Over 10 days in early July, the future agricultural leaders that make up the current Advanced Agriculture Leadership (AALP) class were exposed to interactive learning through their North America Study Tour (NAST).

As we pack up the bus for the last time open, we begin to prepare for the long ride home. Many are excited to see their family and friends, to share their experiences during our NAST and to get back to normal life.

We start off our journey with off the cuff (impromptu) speaking, responding to questions about our thoughts regarding specific speakers and stops along our travels. We hear members reflect on the importance of the relationship between Canada and the USA, our…

Marie-Claude Bibeau, federal Minister of Agriculture and Agri-Food, and Lana Popham, British Columbia’s Minister of Agriculture, Food and Fisheries held a virtual roundtable with British Columbia’s agricultural sector yesterday to listen to their concerns following the devastating floods and landslides and to discuss both immediate and long-term support for the British Columbia agriculture and agri-food industry. Extreme weather events in British Columbia have caused many agricultural producers and their families to struggle in extremely challenging circumstances as they deal with the loss of businesses, homes, livestock, crops and livelihoods. With over 800 farms in British Columbia currently under evacuation orders, the ministers recognized the producers’ courage and perseverance and indicated they are working together to make sure that producers have the resources they need to maintain their mental health and help rebuild their operations.

This week, the Honourable Marie-Claude Bibeau, Minister of Agriculture and Agri-Food, highlighted an investment of up to $78,338 to Maison Francine Leroux under the Local Food Infrastructure Fund’s second phase. Established in 2020, Maison Francine Leroux is a non-profit organization that promotes intergenerational sharing through textile arts, reading and cooking in the community. The Maison Francine Leroux building contains three large rooms, including a collective kitchen, where community members of all ages can safely meet to socialize, share ideas, enjoy coffee or a meal together, and lessen the feeling of isolation.

Acreage, Planting and Harvest In 2020, Ontario dry bean acres were at their highest since 2007. This year, insured acres of dry beans totalled around 115,000 which is comparable to the 10-year average. Acreage of each market class declined in 2021, although the decrease in kidney bean acres was relatively small.

In 2018, Grain Farmers of Ontario’s Board of Directors took a step to address this issue, through mandating the creation of a ‘Farmer Wellness’ program. “The program’s purpose is to foster awareness and provide access to prevention, support, and training resources while developing strategic partnerships to further our efforts,” explains Sarah Plater Findlay, Grain Farmers of Ontario’s human resources consultant. One of those partnerships (which also involved other farming associations and government) supported the creation of a critical recent study called ‘Healthy Minds, Healthy Farms: Exploring the Connection between Mental Health and Farm Business Management’ by Farm Management Canada (FMC).

Preventing foreign animal diseases, addressing a shortage of agricultural workers and reauthorizing a livestock price reporting law are the primary issues on which pork producers will lobby their congressional lawmakers over the next two days, during the fall Capitol Hill fly-in of the National Pork Producers Council. More than 100 producers from across the country are expected to participate virtually in NPPC’s Legislative Action Conference. “These are critical but by no means the only issues of concern to U.S. pork producers,” said NPPC President Jen Sorenson, communications director for Iowa Select Farms in West Des Moines, Iowa. “Failure to address even one of these matters could make it very difficult for hog farmers to continue producing safe, nutritious pork for consumers around the globe. Our fly-in is an opportunity for producers to urge Congress to take action on important issues.”